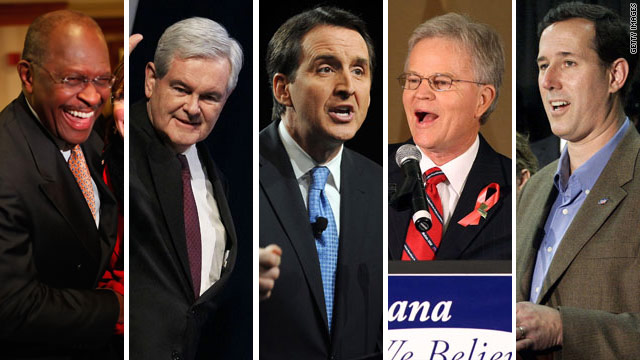 Des Moines, Iowa (CNN) - In the first major event in Iowa featuring a series of potential candidates, five men likely to seek the GOP presidential nomination will speak Monday night at the Iowa Faith and Freedom Coalition's Spring Kick Off.

The coalition is one of the major political interest groups in the state.

"Undoubtedly it will be the kickoff of the campaigning for the Iowa caucuses," event organizer Steve Scheffler told CNN.

The first-in-the-nation caucus is tentatively scheduled for February 2012.

Monday's trip to the state marks Gingrich's third visit this year but the first since indicating last week he is now in an exploratory phase about whether he will mount a run for the nomination.

A spokesman for the former House Speaker said he is "listening and learning" during the day Monday, but would not say who he is meeting with other than attending the evening forum.

Pawlenty and Santorum have made frequent visits to the state meeting with likely caucus attendees and giving speeches outlining their priorities. And both have talked about their opposition to same sex marriage – a hot button issue in Iowa.

Scheffler said he expects the forum participants "to talk a little about social and fiscal issues – they go hand in hand."

Social conservative leaders say while abortion and same sex marriage are important, erasing the debt and deficit are also key issues for their voters.

Because of the recession and economic concerns, it is likely those social issues won't play as predominant a role as they have previously.

Over 60 percent of GOP caucus goers in 2008 identified themselves as evangelical Christians – making them a key constituency for any candidate to succeed in the state.

"These voters are not one issue voters," Scheffler said.

Event organizers expect a large audience of about 800.

Asked if he was upset that former Massachusetts Governor Mitt Romney, former Alaska Governor Sarah Palin and former Arkansas Governor Mike Huckabee, who won the 2008 caucuses, are not attending Scheffler said "I am not upset. They should be here."

Some activists in the state have been unhappy with the slow pace of the election season so far and hope this event marks an uptick in activity.

Several of those attending the forum told CNN they were coming to start educating themselves about the candidates and their positions.

"We want to start the process to figure out who we want to vote for," Gail DeJong said. "We are familiar with some of them but not all of them."

"We feel as Iowans we play an important role so we feel we should be educated," Bryan DeJong said. The DeJongs have participated in caucuses before.

"I want to hear what they have all got to say. How they are going to solve the problems," Verul Olofson said.

Olofson and others said there were not key issues at this time, although some attendees did mention the nation's growing debt as an important concern.