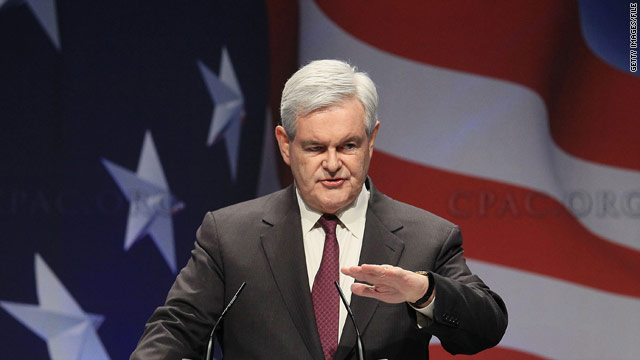 He revealed he hopes to announce a presidential bid in late May at noon in front of Philadelphia's Independence Hall. He asked the group for help building a national audience for that event on the internet and through local media.

In response to a question, Gingrich told the group "corporate PACs can give $5,000 and obviously we'd be thrilled to have as many of them sign up as early as possible."

In an apparent reference to the Contract with America that helped make him speaker in the 1990s he told the group "the campaign I want to build would have a contract in late September of 12" and help "build the party across the board."

Several times Gingrich pointed out that "for legal reasons" he can't say too much – "we are still in the exploratory phase," but he has lined up the beginning of a campaign rollout. He expects former Georgia Democratic Senator and Governor Zell Miller to be a co-chair "once we put the campaign together." He says his campaign would be headquartered in Atlanta.

He also said he is talking to and trying to recruit supporters in key states, such as he did in Iowa earlier this week. A Gingrich aide said he's planning direct mail solicitations starting next week and telemarketing efforts beginning this week.

In addition to doing well in Iowa, New Hampshire, and South Carolina, Gingrich said he hopes to "seal off Georgia as a favorite son." He added that given the way primary timing may shake out "Florida may suddenly loom very, very large."

One aide on the call said they've seen "enormous excitement" in response to the Newtexplore2012.com website setup last week. And Gingrich himself said donors who can't afford to give too much up front are committing $50-$100 a month. He explained about 25 percent of the initial donations came from Carroll County, Georgia but "it is gradually changing" with donors from all over the country.

The former speaker asked for the group's help. Noting that reporters will be calling looking for information he said, "to the extent you can say something nice that is very, very helpful."

He asked the group on the call for fundraising support and assistance building enthusiasm for his kickoff announcement online and in local media markets. He also invited feedback when there are missteps – for example, last week's announcement of his plans to start an exploratory phase in his potential run.

Gingrich said, "I concede last week's announcement got cluttered in ways that were pretty foolish, but we've moved beyond that."

As he does during public events, the would-be candidate consistently mentioned his wife, Callista. She spoke briefly on the call to thank the group saying "we can't do this alone."