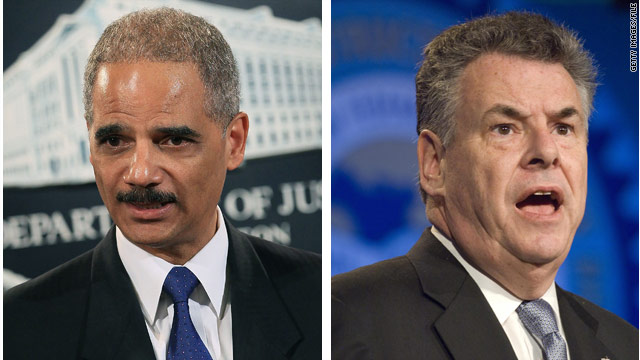 Washington (CNN) – The witness list for a House hearing to examine radicalization in the American Muslim community includes congressmen and several prominent Muslim-Americans. But notably absent from the list is U.S. Attorney General Eric Holder, who has been sharply critical of the hearing set to take place on Thursday.

House Committee on Homeland Security Chairman Peter King told CNN Wednesday that he did not call the head of the Justice Department to testify because he knew that Holder would dispute what King says he hears privately from law enforcement officials - that Muslim-Americans aren’t sufficiently cooperating in anti-radicalization efforts.

Holder said Tuesday that the Justice Department does have a “good relationship” with the Muslim American community, and said “tips that we have received, info that has been shared has been critical to our efforts to disrupting plots that otherwise might have occurred.”

When asked for reaction to Holder’s comments, the New York congressman told CNN, “That’s not my experience.”

“New York is the epicenter and I’m not aware of any tips that have been given in Nassau, Suffolk [counties] or New York City, that’s one, and then talking to officials around the country, I get the same complaints,” King added.

Holder suggested there is danger in focusing on a group of people as a whole rather than individuals, warning, “We don't want to stigmatize, we don't want to alienate entire communities.”

Critics have also accused King of "fear-mongering," and say Thursday’s hearing is reminiscent of Sen. Joseph McCarthy's hearings into alleged Communist infiltration in the early years of the Cold War.

But King has steadfastly defended the hearing, saying it is necessary to explore the extent to which al Qaeda is trying to influence U.S. Muslims.

“I don’t want to demonize anyone either,” King said. “But talk to [Deputy National Security Advisor Dennis] McDonough. He said al Qaeda is attempting to radicalize the American Muslim community. So if we are going to look for radicalization from al Qaeda, where else would we look?”