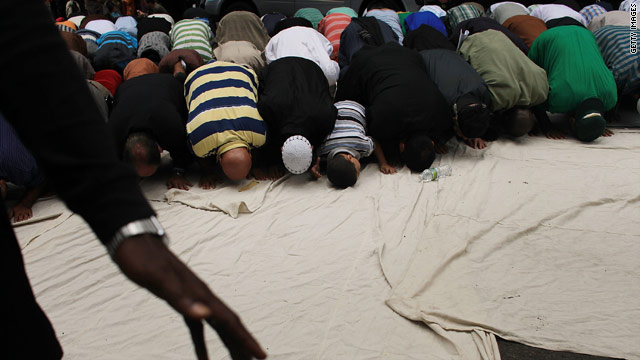 Washington (CNN) - Americans are divided over whether Islam is more likely than other religions to encourage violence among its believers, according to a new national poll. A Pew Research Center survey also indicates wide partisan and generational divides on the issue.

The poll indicates that 40 percent of the public says that Islam is more likely than other faiths to encourage violence among its followers, with 42 percent disagreeing and nearly one in four unsure. Those numbers are little changed over the past few years, but a Pew poll conducted in March 2002, six months after the September 11th terrorist attacks, indicated that by a two to one margin, Americans said Islam was not more likely to encourage violence.

The poll's Wednesday release comes one day before a scheduled congressional hearing into the alleged radicalization of some Muslims in the U.S. The chairman of the House Committee on Homeland Security, Republican Rep. Peter King of New York, says Thursday's hearing is necessary to explore, among other things, the extent to which al Qaeda is trying to influence and indoctrinate U.S. Muslims.

King's plans have created an uproar, with critics accusing Republican leaders of bigotry and drawing analogies to Sen. Joseph McCarthy's hearings into alleged Communist infiltration in the early years of the Cold War. Leading American Muslims on Wednesday strongly criticized the hearings into the alleged radicalization of members of their community, calling it an unfair attack on loyal citizens and a dangerous break from the traditional U.S. embrace of tolerance and pluralism.

The survey indicates that by a nearly two to one margin younger respondents say Islam does not encourage violence more than other faiths, with those 65 and older disagreeing by 42 to 35 percent margin.

The Pew Research Center poll was conducted Feb. 22-March 1, with 1,504 adults nationwide questioned by telephone. The survey's overall sampling error is plus or minus three percentage points.