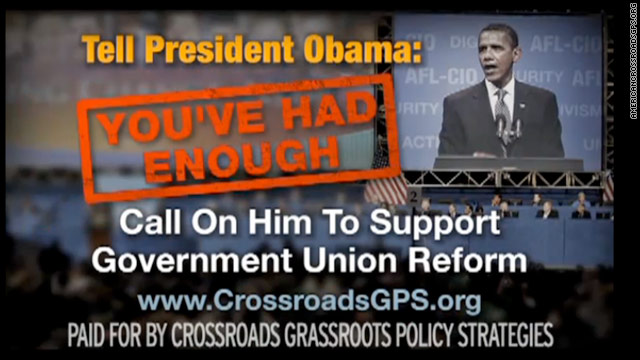 Washington (CNN) - An independent Republican group that was a major player in the midterm elections is launching a national ad Wednesday that takes aim at public service unions and their support for President Barack Obama and the Democratic Party.

Crossroads GPS, one of the two groups that makes up American Crossroads, says they are spending $750,000 to run their 60 second commercial on CNBC, CNN and Fox News Channel.

The spot starts with sound from Democratic Rep. Mike Capuano's controversial comments from last month, when he said that "you gotta get out in the streets and get a little bloody when necessary."

The Massachusetts congressman later apologized for the comments that he made at a labor rally.

The narrator in the ad then asks "why are Democrats shutting down state capitals?" as the spot shows images of the protests in Madison, Wisconsin, where the state's newly elected Republican governor, in a controversial move, is trying to balance the state's budget by eliminating some of the collective bargaining rights of public employee unions.

The narrator answers his question by saying "to protect a system that pays unionized government workers 42 percent more than non-union workers, a system that collects hundreds of millions in mandatory dues to back liberals who support government unions."

The commercial also uses a three and a half year old clip of then presidential candidate and Sen. Barack Obama thanking members of the politically powerful Service Employees International Union (SEIU) for their support in getting him elected. And the ad ends with a National Education Association (a nationwide teacher and educators union) official saying that his union is powerful because of the "hundreds of millions of dollars in dues" that its members pay.

Most national polls indicate that a majority of Americans oppose moves to strip public sector unions of their collective bargaining rights. According to a new Bloomberg National survey released Wednesday, more than six in ten say employees should have the right to collectively bargain for their wages. But by a 43 to 21 percent margin the public says that public sector employees are better compensated than their private sector counterparts.

Earlier this month American Crossroads and Crossroads Grassroots Policies Strategies (Crossroads GPS) announced their goal is to raise $120 million this election cycle. They said the money raised will pay for advocacy efforts "to compete with the torrent of outside money from unions and left-leaning groups."

The organizations also announced what it calls a "Presidential Action Fund," a new initiative which it says will be dedicated to shaping issues and themes in the 2012 election cycle. A release says the fund will conduct research, polling, micro-targeting, issue advocacy, and getting out the vote efforts.

American Crossroads, a 527 organization that must disclose its donors, and Crossroads GPS, a 501(c)(4) group, which is not required to disclose its contributors, raised more than $70 million combined in last year's midterm election cycle. The groups were created with the help of Karl Rove, the political adviser to former President George W. Bush, as well as former Republican National Committee chairmen Ed Gillespie and Mike Duncan, to supplement Republican Party efforts in the midterms. Democrats criticized Crossroads' efforts for accepting funds from undisclosed donors.

The groups recently announced that they were going up with radio ads in 22 House districts in the battle over the federal budget, targeting 12 House Democrats for voting against a House Republican bill to fund the government from March through October, and praising ten GOP representatives for voting in favor of the legislation.

The ads were American Crossroads' second big ad buy of the cycle. Last month, the group also spent nearly $100,000 to run radio spots in 19 House GOP districts where the Democratic Congressional Campaign Committee went up with ads attacking those Republican lawmakers for voting to cut education and research funding.

"People of all parties support collective bargaining, and that fact scares Karl Rove, the people at Crossroads and folks like them. Bob Chanin's quote was obviously taken out of context, with the intent of being purposefully divisive. I think Americans are smarter than that, and they are tired of the nasty rhetoric. There is a strong desire to restore balance and civility to the debate-to have all of the parties involved to come to a table and truly negotiate the issues. I think people are going to see these ads for what they are: an attempt to pit working people against working people, when we all know that CEO greed is what caused this current financial crisis."