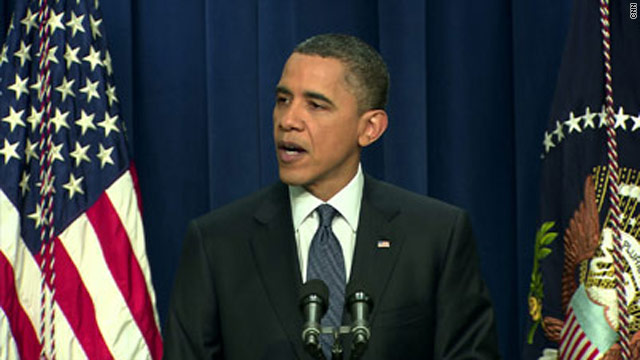 12:30 p.m. - President Barack Obama took the stage and addressed the earthquake and tsunami in Japan.

Obama said there is a U.S. aircraft carrier in Japan and others on their way. They are working to account for all military personnel stationed there. U.S. embassy personnel in Tokyo have moved to another location, he said.

On oil: “Keep all options on the table when it comes to any supply disruptions.”

Click to watch video
12:37 p.m. - Obama said gas prices affect everyone – from businesses to families. He said lost production in Libya has tightened supply, but the global community can withstand supply disruptions like this.

Obama continued by saying we are prepared to tap strategic petroleum reserve if needed, but we are more capable of facing shortages – we use 7 percent less oil than in 2005 because we are adapting and our economy is more efficient.

12:39 p.m. - Obama said that in December Democrats and Republicans came together to pass a payroll tax cut that is helping the economy and creating jobs. He said "it should help to act as a cushion" to the rising gas prices. He said the tax cut should total about $1,000 a year for most Americans.

12:40 p.m. - Obama said the U.S. needs to continue the domestic production of oil and gas – said it reached highest level last year in seven years. He used that figure to rebut GOP claims his administration is not doing enough in terms of domestic production.

Without acknowledging her question, Obama just said that is not a long term solution.

12:44 p.m. - NBC's Chuck Todd started with a question on Libya. He asked Obama if he is prepared to use any means necessary to get Col. Gadhafi to leave.

Obama responded to Todd's question: "…across the board we are slowly tightening the noose…"

12:48 p.m. - Obama said Secretary of State Hillary Clinton will meet with the opposition in Libya in the next several days. He said he thought it was important to assign a representative who's specific role is to interact with the opposition, adding that the administration "moved about as swiftly as any international coalition has moved as far as sanctions."

The president reinforced all options are on the table in coordination with the international coalition.

12:49 p.m. - NBC Todd's follow-up: Are you concerned Gadhafi with more firepower will win this standoff with the rebels? Obama: "I am concerned, absolutely."

12:50 p.m. - Mimi Hall of USA Today asked Obama about the three week Continuing Resolution in Congress and about Gadhafi leaving.

On Libya Obama said when it comes to U.S. military actions, you need to balance costs and benefits. He said the desired outcome is that Gadhafi steps down.

12:57 p.m. - On the current budget standoff on 2011 budget, Obama said he is in close contact with leaders of both parties of Congress.

He said both sides need to compromise on "prudent" cuts somewhere between what both parties have put forward. "It shouldn't be that complicated," he said.

Obama said there may be one more short-term extension, but repeated his mantra that we can't run the budget based on short term extensions. He said there are certain things the House GOP will put forward that he won't be able to accept – he used Pell Grants as example, but said "we've got to live within our means."

He also took issue with riders attached to the budget passed by the House GOP. He said he prefers not using the budget to sneak things in to promote a political agenda.

12:59 p.m. - ABC's Jake Tapper said he can't recall a time when the U.S. ever had to rush assistance to a nuclear power plant in another country. How serious is this? And a follow up question about Pentagon's treatment of Patrick Manning connected to WikiLeaks.

1:01 p.m. - Chip Reid of CBS cited an interview of Ghadafi's son where he said they will crush resistance – asked: can the U.S. stand by and watch?

1:03 p.m. - Obama said U.S. has an obligation to prevent something like the Balkans and Rwanda genocides of the 90's. He said we have to look at what happens on a case by case basis.

He said Gadhafi's family will be held accountable for any atrocities they commit.

1:05 p.m. - CBS's Reid follows up on whether Clapper made a mistake in testimony yesterday on Gadhafi's capability and likelihood to prevail.

"He was making a hard headed" assessment about capability, he "wasn't stating policy," Obama said.

But Obama was quick to point out policy is set by him as president. Obama said Gadhafi is on wrong side of history.

1:05 p.m. - Zachary Goldfarb with The Washington Post asked a question about tapping SPR (U.S. strategic petroleum oil reserves): What targets do we need to hit to get to that point, gas prices etc.?

President Obama said he won't answer that... Gets into historical rhetoric about the issue.

1:07 p.m. - A little over 30 minutes into presser – so far Obama's answered questions from five reporters, two print reporters and three television reporters. It's interesting he hasn't called on the wire reporters – they are usually the first ones to be called on.

1:09 p.m. - Continuing on gas prices, Obama said the American people feel this pretty acutely… money out of my pocket so to speak. He said some of the steps the U.S. is taking are making a difference. He added that the administration will try to do everything they can not only to stabilize the market… if there's price gouging they're going to go after that. If they see disruptions or shifts that are so disconcerting to people than they'll consider tapping the SPR.

"So overall I'm positive about the fact that we're moving slowly but surely into positive job growth" over the next several months. He said he's still concerned about the housing market.

1:15 p.m. - Obama said on economy overall that the last jobs report showed growth in the private industry as strong. He said there were some lost jobs in state and local government (teachers, policeman, firefighters laid off) and that it's very important when we think about budget to understand our long term debt and deficits are not caused by having Head Start teachers in the classroom... it's caused by Medicare costs instead.

He said budget cutters shouldn't be going after things like funding for Corporation for Public Broadcasting.

1:18 p.m. - Obama called on a foreign journalist for the 6th question. He asked what message is in his discussions with leaders in the Middle East.

Obama said the U.S. believes in peaceful protests and use of violence in response that.

Also he said it is in the interest of the region to reform itself so that each person's talents can be harnessed. He said each country is different, but this process can be a great opportunity for the region to see more economic growth.

1:19 p.m. - Obama took a question – after he said he had answered his last question – from an Asahi reporter (Japanese newspaper) – asked for his personal response to the tragedy and if the U.S. is ready to provide assistance. President said yes and that the U.S. will immediately help with lift capacity... said he's "heartbroken."

1:21 p.m. - Obama called on seven reporters in 48 minutes (including his opening statement).