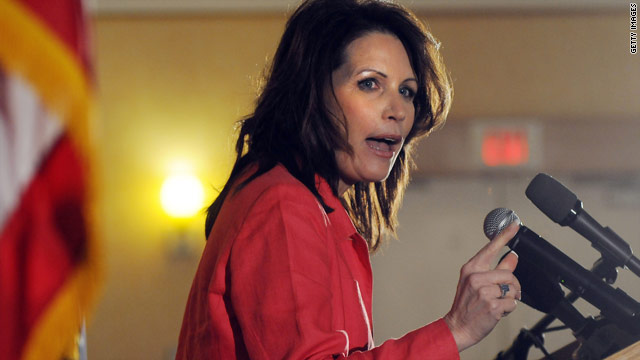 As the Minnesota lawmaker spoke to the GOP state committee on Saturday in Nashua, a line of liberal activists burst into a chant and waved signs that read, "Michele Bachmann, We Insist! End AIDS treatment waiting lists."

The activists were incensed at proposed budget cuts to PEPFAR, the President's Emergency Plan for AIDS Relief.

As they attempted to circle the room, getting closer to the platform where the congresswoman was speaking, conservatives in attendance sprang into action – booing, shouting down the activists and ushering them out of the room.

After they were ousted, Bachmann lashed out at them.

"They just brought the buses in from Madison, Wisconsin," the congresswoman said, an apparent reference to recent protests over bargaining rights of most Wisconsin state workers.

"Get ready, we're seeing this kind of response because the left knows that we're coming," Bachmann said over loud applause.

The melee followed a question-and-answer exchange on the subject earlier Saturday in Manchester. As Bachmann spoke to a crowd gathered at a school, one questioner ripped into the plan to cut PEPFAR funding.

"That could result in over a million deaths due to AIDS alone," the questioner claimed. "It is not who we are, to cut this funding. So I'm wondering, if you will agree, to make sure that we have this funding."

Bachmann responded, thanking the young woman for her compassion on the subject. But Bachmann also said that the issue involves serious choices.

"The United States is the most generous nation on earth. We have to have a balancing act between our benevolence and our prosperity. And our prosperity today is at risk," Bachmann said.

"We will not survive if our benevolence allows the treasury to not only be empty – but to have us be a debtor nation greater than we have ever been before," she added.