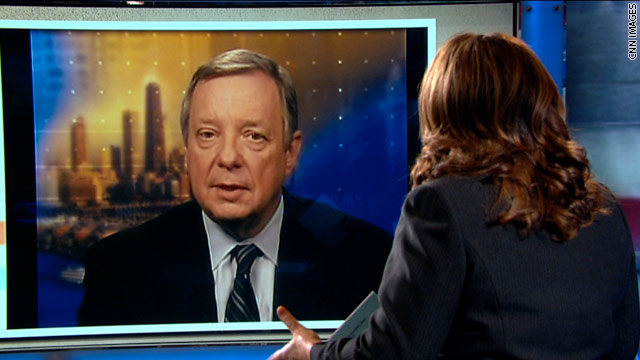 Democratic Sen. Dick Durbin of Illinois said the president is right to consider putting "the oil we have in reserve into the economy."

Click to watch video
"I'm worried that if we don't use the reserve that our economic recovery will stall and fall backwards," Durbin said Sunday on CNN's "State of the Union." "We don't need to see unemployment figures going up."

Durbin said tapping the emergency 727-million-barrel reserve would pump resources into the market and help address the problem impacted by unrest in the Middle East.

According to the U.S. Energy Information Administration, prices have gone up from an average of $3.19 per gallon to $3.52 per gallon between Feb. 21 and March 7.

At a news conference Friday, President Obama said he's willing to tap the reserve in response to possible disruptions to America's oil supply. However, Obama made it clear the current situation differs from previous instances when the government dipped into the strategic reserve, like Hurricane Katrina's impact on Gulf region refineries in 2005.

"Gas prices have doubled under Obama and one of the reasons is because he has not issued drilling permits, including in the Gulf," Kyl said on "State of the Union." "We can get American energy on line if we simply grant the permits so the companies can start the drilling."

Republican Rep. Kevin McCarthy of California said he wants an "all of the above" approach to energy, which he said does not include the short-term solution provided by tapping the reserves.

"He certainly has participated," McConnell said on "FOX News Sunday." "There has been a conscious effort (by the Obama administration) to make it difficult to drill in this country."