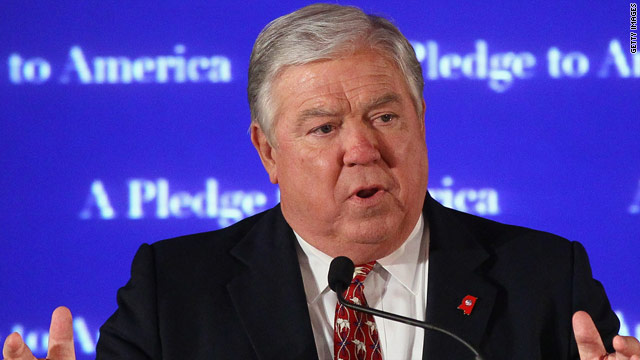 Barbour gets tough on Obama

(CNN) - In what could be the beginnings of a presidential stump speech, Mississippi Gov. Haley Barbour took a swipe at President Obama's economic policies Monday during a speech to the Chicagoland Chamber of Commerce.

Speaking in the president's hometown, Barbour painted a bleak picture of the economy despite recent clamor from many Democrats in Washington that conditions are improving.

"The professional economists tell us the recession is over," Barbour said. "That's hard to see on Main Street, and I don't hear anybody celebrating. In the Heartland, this doesn't feel much like a recovery. The simple fact is, our economy isn't performing anywhere near its potential."

Barbour, likely to enter the presidential race in a matter of weeks, appeared to tailor his speech directly to members of the Tea Party movement where concerns about the deficit and federal spending are the overwhelming concern.

Barbour noted GDP growth for the last quarter of 2010 was at an underwhelming 2.8 percent, median home prices are at the same level they were seven years ago, and economic growth as a whole is falling far short than necessary to find jobs for the 7 million Americans who have joined the ranks of unemployment since the recession began.

"It's time we asked ourselves: Why is this recovery so flat?" said Barbour. "In my view, it's not a failure of business or a failure of free enterprise – it's a failure of government policy.

"The policies embraced by this White House show little understanding of how our economy actually works," he said. "They seem to have no trust in business. No sense of how entrepreneurs build new companies. No insight into how small businesses create jobs."

Barbour has said he will decide on a presidential bid this spring.