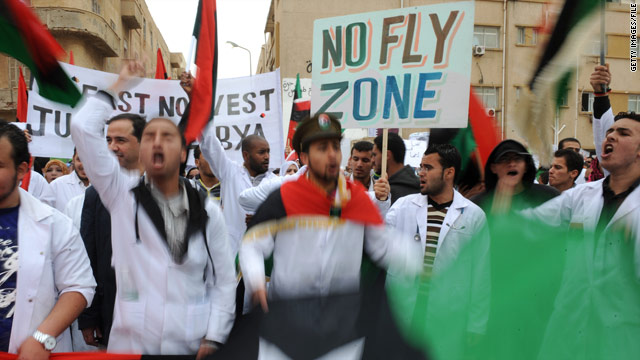 CNN Poll: Americans say yes to no fly zone, no to ground troops

Washington (CNN) - A majority of Americans would support a move by the United States and other allies to establish a no fly zone in Libya, according to a new national poll.

But a CNN/Opinion Research Corporation survey also indicates that most of the public would oppose a move to send ground troops to fight in the civil war in the north African nation. The poll, released Monday, also suggests Americans are divided on how President Barack Obama is handling the crisis.

Fifty-six percent of Americans say they would favor the U.S. and other allied countries establishing a "no-fly zone" in Libya, with four in ten opposed. The move would allow U.S. aircraft or missiles to shoot down

Forces loyal to Libyan leader Moammar Gadhafi have been fighting to recapture towns from the rebels since an uprising began last month. Pleading for international help as they continue to lose ground to pro-Gadhafi forces, rebels are asking for a no-fly zone that would theoretically thwart airstrikes.

The Arab League voted Saturday to back a no-fly zone "to protect the civilian population" in Libya. The U.S. and other western powers have said any action by the international community, including a no-fly zone, would have to have regional support and a clear mandate from the United Nations.

According to the poll, only 32 percent of Americans would support U.S. air strikes in Libya without an attempt to establish a "no-fly zone," with 62 percent opposed.

The survey indicates there is vast opposition to injecting U.S. ground troops into the conflict, with 76 percent saying they would oppose such a move. But 53 percent say they would favor Washington and other countries sending arms and supplies to the Libyan forces fighting to remove Gadhafi from power.

"The no-fly zone wins support from Democrats and Republicans alike, with virtually no partisan differences. That's rare in politics these days," says CNN Polling Director Keating Holland. "A gender gap does exist though, which is typical for questions on military action. More than sixty percent of men favor a no-fly zone, compared to 50 percent of women."

The survey indicates that Gadhafi himself is extremely unpopular, with more than seven in ten Americans holding an unfavorable view of the Libyan leader.

According to the poll, three-quarters of Americans say that international organizations or allied countries should take the lead role on Libya, with only 23 percent saying the U.S. should be in the driver's seat when it comes to Libya.

Forty-five percent of those questioned say they approve of how the president's handling the crisis, with four in ten saying they disapprove of how Obama's dealing with the situation.

"Fifteen percent of Americans don't have an opinion on Obama's policies on Libya - that's about four to five times higher than the "don't know" response when CNN has asked Americans to evaluate Obama on nearly all major issues," says Holland.