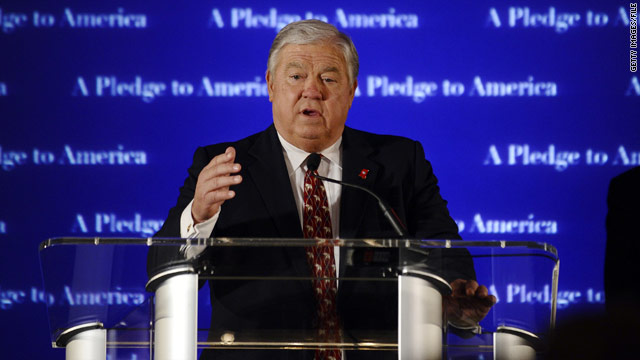 Barbour meets and greets in Iowa

Barbour keynotes the Chairman's Dinner in Davenport, Iowa. The gathering is the first of a series of fundraising dinners designed to strengthen the Iowa Republican Party and county party organizations across the state.

"We're excited to have Governor Barbour as the first speaker in the Chairman's Series. This will be one of Governor Barbour's first visits to Iowa, and he'll have an opportunity to introduce himself to a key constituency in southeast Iowa at our county building event tonight," Iowa GOP Chairman Matt Strawn tells CNN.

On Monday evening, Barbour was in Sioux City, on the other side of the state, attending a Woodbury County Republican party dinner. Before the dinner, Barbour met with local residents, saying that "if I run I intend to compete to win Iowa," according to Mason City Globe Gazette.

Barbour continues reaching out to Republican party lawmakers, leaders and activists Tuesday with a stop at the Statehouse in Des Moines before heading to Davenport.

Barbour continues to say he plans to decide at the end of April, after the Mississippi legislature concludes its session, whether or not he will seek the GOP presidential nomination. This month he's beefed up his political operation with some key hires.

The two-term Mississippi governor and former chairman of the Republican Governors Association and the Republican National Committee was also in Iowa last month, meeting with state GOP officials and Republican Gov. Terry Branstad on Presidents' Day. The state plays a crucial role in the race for the White House as its caucuses kick off the presidential primary and caucus calendar.

Barbour arrived in Iowa after heading to President Obama's hometown to criticize the his economic polices. During a speech Monday to the Chicagoland Chamber of Commerce, Barbour painted a bleak picture of the economy despite recent clamor from many Democrats in Washington that conditions are improving.

Barbour arrived in Iowa as news spread that his press secretary in the Mississippi's governor's office stepped down in controversy. Dan Turner resigned after reports that he wrote internal e-mails poking fun at former Attorney General Janet Reno, and that he made insensitive jokes about the earthquake in Japan.

- CNN's Peter Hamby and Alexander Mooney contributed to this report.