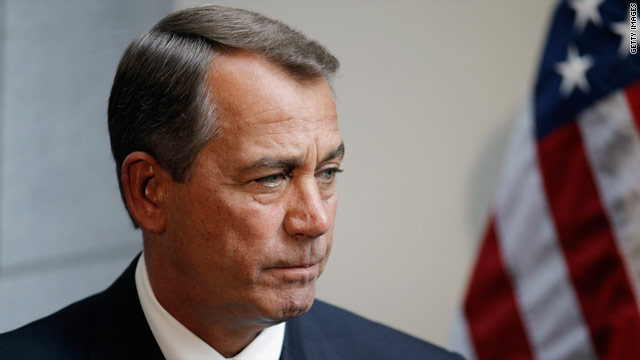 Washington (CNN) - While acknowledging mounting opposition from conservative Republicans, House Speaker John Boehner said Tuesday the House would pass a three-week stopgap spending bill that averts a government shutdown to allow further talks on the federal budget for the rest of the fiscal year.

The House is scheduled to vote Tuesday afternoon on the temporary extension of the continuing resolution that funds the government. If approved, the measure would go to the Senate.

Without the short-term measure, the government would shut down after Friday.

Boehner, R-Ohio, told reporters that he knows some conservatives in the Republican caucus, especially Tea Party backed newcomers elected last November, are calling for immediate deep spending cuts for the remainder of the fiscal year, which ends September 30.

"Listen I understand that some of our members want to do more, but what is it in this bill they disagree with? Nothing. Nothing," Boehner said, adding, "I'm confident that this bill will pass and we'll send it on to the Senate."

In recent days a growing number of House Republicans have said they're opposed to the short term bill that would fund the government until April 8 and cut $6 billion from current government spending.

Ohio Republican Rep. Jim Jordan, who heads a key bloc of fiscal conservatives, said Monday he doesn't want to fund the government in "bite-sized pieces." Others including Minnesota Rep. Michele Bachmann and Indiana Rep. Mike Pence want so-called "policy riders" that were attached to a previous House-passed spending bill to be included, such as de-funding health care and Planned Parenthood.

Boehner noted the three-week extension bill and a previous short-term bill would cut $10 billion in total from current spending levels. He called that figure a "small down payment" on a larger deal he believed could be reached soon on spending for the rest of the fiscal year.

"We're hopeful we'll have a long term continuing resolution through September 30th and we're hopeful that we'll have it soon," Boehner said. However, he declined to give any details on how the two sides could achieve a compromise, and pressed the White House and Senate Democrats to come forward with a proposal.

So far, Senate Democrats have proposed a total of $10.5 billion in cuts - roughly the total amount included in the most recent short-term extension and the one under consideration this week.

"Why can't the Senate show us what they are capable of producing? I don't know what that number is," Boehner said. "When we get that number, we'll have a better opportunity to have real negotiations and a real conference on cutting spending, reducing the uncertainty and creating a better environment for job creation."

Last week, the Senate rejected a bill that would cut more than $6 billion as well as the House-passed Republican bill that would cut another $57 billion from the 12 percent of the budget that comprises non-military discretionary spending. Senate Democrats said those votes showed the need for compromise on both sides.

Responding to Boehner's demand for a Democratic plan, the number two House Democrat, Rep. Steny Hoyer of Maryland, told reporters the Republicans now control the House and it was their turn to propose something.

"When you win you have a responsibility. We're waiting to hear what their next step is," Hoyer said.

But Hoyer said he opposed any more short-term funding bills, declaring: "We're not going to do $2 billion a week for the next 30 weeks. Period."

Congress faces several spending related issues, including authorizing funding for the rest of the current fiscal year, negotiating a federal budget for fiscal 2012 and raising the nation's debt limit in coming months.

Looking ahead to future battles over more spending cuts, Boehner warned the White House that Republicans won't allow negotiations over this year's spending bill to include talks over how to raise the nation's debt limit, and pushed for even more spending cuts to be linked to that vote later this spring.

"We're not going to increase the debt limit of the United States without real spending cuts and real changes to the way we spend the people's money," Boehner said.

Senate Democrats, meanwhile, have said they want negotiations over this year's spending bill to deal with entitlement reform and the debt limit.

According to a senior House Republican aide who attended Tuesday's regular weekly meeting of House Republicans, Boehner told his GOP colleagues that he views the battle over government spending in three separate phases – the fight over current spending levels, the debate over next year's budget, and the vote on the debt limit.

Boehner made it clear that the debt limit vote would include some reforms, the aide said, suggesting that could include specific caps on discretionary spending for federal agencies, a proposal Republicans included in their campaign platform last fall.

President Barack Obama proposed a five-year freeze on discretionary spending in his budget proposal for next year.