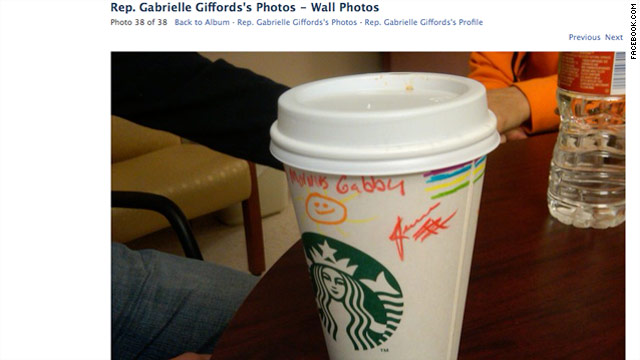 Washington (CNN) – Astronaut Mark Kelly said he is optimistic his wife, wounded Congresswoman Gabrielle Giffords, can attend the launch of the space shuttle Endeavour scheduled for next month.

"I am hopeful that can happen," Kelly told a telephone news conference sponsored by the American Red Cross.

Kelly was promoting 100 events sponsored by the Red Cross around the country this Saturday – called "Gabrielle Giffords Honorary Save-a-Life Saturday" where trainers will be teaching Americans key first aid and CPR skills.

Organizers want people equipped with the knowledge needed to save lives - as happened at the shooting of Giffords and others in Tucson on January 8 when people jumped in and gave critical aid to the victims until emergency workers arrived.

When asked about her condition, "I am really encouraged," Kelly told reporters. "She is doing well. She continues to improve daily."

Giffords is undergoing treatment for her head wound at the Institute for Rehabilitation and Research in Houston, where her husband is training for his mission.

Last Friday her doctors told a news conference that she has been speaking in full sentences and is able to walk with assistance.

Kelly told reporters Tuesday there was no set deadline for making a final decision about whether Giffords will be able to make the journey to Florida for the shuttle takeoff.

"We are looking at that right now," he said.

Kelly said he spends each morning at the hospital bringing her a cup of coffee and a New York Times newspaper from which the couple reads some of the articles.

Each day the coffee store puts different messages on the cups.

Giffords "is very interested to see what is on her cup" each day and enjoys seeing the various sayings such as "have a great day," Kelly said.

"The time we get to spend together is pretty special," he added.

After their morning time, Kelly goes off for training and then returns to the hospital around 6 p.m. to spend the evening there before going home to sleep.

One of those participating in the Red Cross events will be Daniel Hernandez, an intern in Giffords' office, whose quick reaction and first aid skills are credited with saving her life.

Event organizers and officials from her office said it may never be known the full benefit of people learning these critical skills, but if "one life is saved this entire effort will have been worth it," Giffords' Communications Director CJ Karamargin said.

To kickoff the nationwide events the Red Cross is sponsoring a training Wednesday on Capitol Hill for Giffords' colleagues and their staffs.