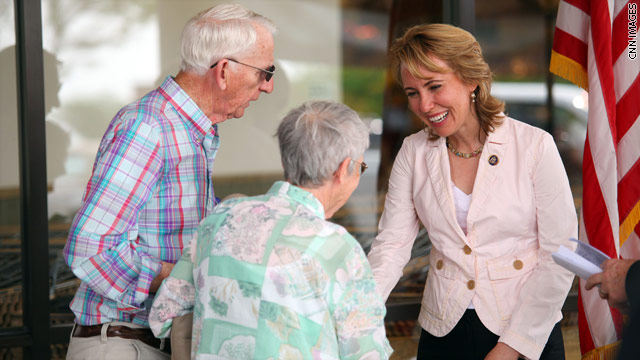 Reps. Debbie Wasserman Schultz and Adam Smith and Sen. Kirsten Gillibrand were the co-chairs of the event, held at the International Brotherhood of Teamsters headquarters. The three said they joined together "to support our good friend and colleague."

"Gabby must focus on the important work of her recovery. With that in mind, we have joined together to support Gabby, and we hope that we can count on you to join us!" read the invitation sent last month from the three chairmen.

Wasserman Schultz is one of Giffords' closest friends in Congress. She has visited her in the hospital four times, once this month.
"I want to make sure Gabby Giffords has the resources that she needs. We are all here because we have her back," Wasserman Schultz said before the event.

Giffords, who is in her third term, is making good progress in her rehabilitation at a Houston facility from critical head wounds sustained in a shooting January 8 while she was hosting a constituent event in Tucson, doctors said.

Wasserman Schultz said she is "hopeful" and "optimistic" that Giffords will return to Washington and to her job full-time.

"We are going to make sure, when she does back, she has the resources she needs to hit the ground running," the Florida congresswoman said.

There was no minimum donation in order to attend the event; the maximum individual contribution was $2,500.

Organizers did not have an estimate of how much was raised but said there was a large outpouring of interest from those in Washington, in Arizona and on online.

The House Democratic leadership, including Minority Leader Nancy Pelosi and Whip Steny Hoyer, were hosts for the reception.

Giffords' campaign has just over $285,000 cash from her 2010 election, according to the nonpartisan Center for Responsive Politics, which tracks the role of money in politics.

She spent $3.89 million in last year's election, in which she narrowly beat her Republican opponent.

The campaign arm of the House Democrats, the Democratic Congressional Campaign Committee, recently listed Giffords as one of its 15 most vulnerable members.