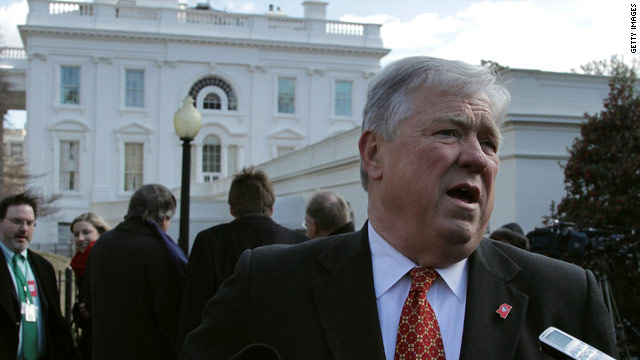 (CNN) - Mississippi Gov. and possible 2012 Republican presidential candidate Haley Barbour says his lack of name identification may actually help him if he decides to take the plunge and run for the White House.

"I start off with hardly any Americans who really know me. There are some political leaders, some elected officials, some reporters, but the average American has no reason to have ever heard of Haley Barbour," the governor said Tuesday during an interview with Radio Iowa.

When Radio Iowa's Kay Henderson then questioned Barbour if his lack of name ID is an advantage in a year when other possible candidates like Sarah Palin are well known, the Mississippi Republican responded, "I tend to look at it more like Jimmy Carter and Bill Clinton. At this time and the year before each of them was elected president, nobody ever heard of them either,"

"And they were both southern governors," Barbour added.

A brand new poll backs up Barbour's claim that he is not well known by most Americans. According to an ABC News/Washington Post survey released Wednesday, 57 percent of Republicans and independents who lean Republican didn't know enough about Barbour to form an opinion. That figure is much higher than the 5 percent who were unsure about Palin, the former Alaska governor, or the 19 percent who were unsure about former Massachusetts Gov. Mitt Romney and former House Speaker Newt Gingrich. It's also much higher than the 23 percent who didn't know enough about former Arkansas Gov. Mike Huckabee to form an opinion.

Barbour wrapped up a two-day visit to Iowa Tuesday night by headlining a state Republican party dinner. Barbour keynoted the Chairman's Dinner Tuesday night in Davenport, Iowa. The gathering is the first of a series of fundraising dinners designed to strengthen the Iowa Republican Party and county party organizations across the state.

Barbour also reached out to Republican Party lawmakers, leaders and activists with a stops in Sioux City and at the Statehouse in Des Moines before heading to Davenport.

The two-term Mississippi governor and former chairman of the Republican Governors Association and the Republican National Committee was also in Iowa last month, meeting with state GOP officials and Republican Gov. Terry Branstad on Presidents' Day. The state plays a crucial role in the race for the White House as its caucuses kick off the presidential primary and caucus calendar.

Barbour continues to say he plans to decide at the end of April - after the Mississippi legislature concludes its session - whether or not he will seek the GOP presidential nomination. This month he's beefed up his political operation with some key hires.