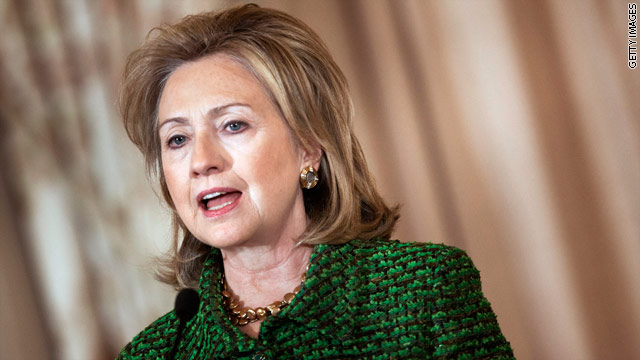 CNN Poll: Two out of three have positive view of Secretary Clinton

Washington (CNN) - Nearly two-thirds of Americans have a favorable view of Secretary of State Hillary Clinton, according to a new national poll.

The 65 percent favorable rating for Clinton in a CNN/Opinion Research Corporation survey released Wednesday is one of the highest ratings she's ever had. Thirty-one percent of those questioned say they have an unfavorable view of Clinton, who's currently in the Middle East dealing with the recent uprisings in the region.

"Secretary Clinton's all-time high was just after her husband was impeached in December, 1998, when her favorable rating reached 67 percent, but before then, her favorable ratings hovered in the high 40's to mid 50's. As a Democratic senator from New York, her ratings dipped as low as 44 percent and never got higher than the mid-50s, and her favorability hovered around the 50 percent mark throughout her 2008 presidential campaign," says CNN Polling Director Keating Holland. "But after Barack Obama nominated her to be Secretary of State, her rating rose to 66 percent and has stayed consistently above the 60 percent level since then."

Thirty two percent say they have never heard of Boehner or don't know enough about him to form an opinion, down from 49 percent just before the midterm elections.

Boehner took over as House Speaker at the beginning of the year, after the Republicans won back the chamber in November's elections, thanks to a 63 seat net gain in the House.