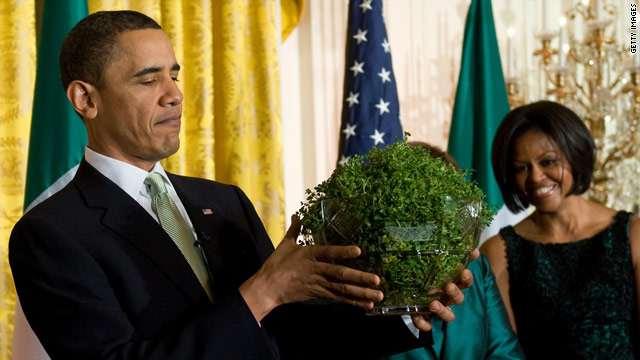 But, perhaps by luck of the Irish, some four years after the president learned about an Irish ancestor who fled Irish famine and came to the U.S. - new information is emerging about 28 other Irish-Americans who share the same Irish ancestor with the president, and are still alive.

The information comes via a survey done by Ancestry.com and provided to CNN on Thursday.

CNN spoke with three of these Obama relatives. They have mixed thoughts about their family ties to the president.

Dorma Lee Reese is 83-years-old and lives in Tucson, Arizona. She describes herself as not a fan of her third cousin.

"I appreciate the office. But I can't appreciate what he's done," Reese told CNN. "I just think that we're in a bigger mess than we've ever been in."

"There's pride in family and being related to a president. And I recognize the historical significance of his election," Dillard said. "However, I do not agree with his political positions."

Dillard explained that he knew of his family ties to Obama before the election. Dillard's mother was a first cousin of the president's grandfather, Stanley Dunham.

The years-long secretary and art teacher is a Democrat and lives in Maumelle, Arizona. As half-sister to Stanley Dunham, she is Obama's great aunt.

"I'm proud of it," Dunham said about her ties to the president.

Dunham explained that she attended Obama's inauguration, where she briefly met him.

"I hadn't seen him since he was a little, bitty guy," Dunham said. "I just gave some things to his security…that I had carried to the inauguration."

Dunham explained that they were family photos of deceased relatives she shared with Obama.

The Ancestry.com survey shows that President Obama and the 28 others are all descendants of an Irish immigrant named Falmouth Kearney. In 2007, then Senator Obama learned of his family ties to Kearney.

"This is part of a larger project," Ancestry.com Lead Family Historian Anastasia Harman said. "As sort of a micro study of Irish immigrants' impact on America, we wanted to pick a ship full of Irish immigrants that came during the potato famine and see how they impacted America."

Kearney was one of those immigrants escaping the famine that killed approximately 1 million people between 1845 and 1852.

He traveled on the 903-ton ship Marmion, which arrived in New York harbor in March of 1850 along with 288 others. Kearney traveled with his sister and her husband, Margaret and William Cleary.

The White House did not respond to CNN specifically regarding the 28 relatives revealed in the new Ancestry.com study. But on this St. Patrick's Day, the president did talk more broadly about his Irish roots.

It came as he welcomed Irish Prime Minister Enda Kenny to the Oval Office.

Amid talks about ties between the U.S. and Ireland, the president announced a bit of news.

"And finally, I wanted to say today that I intend to come to Ireland in May," the president said. "And I'm expecting to go not only to all the famous sites, but also to go to Moneygall, where my great-great-great-great-great grandfather hails from."

As for his Irish-American relatives, might they invite the president to the next family gathering?

"He's welcome to come to any family gatherings," Dean said. "I don't have anything against him personally. I think he's to be commended for the achievements of getting elected."

But Reese took a different tack.