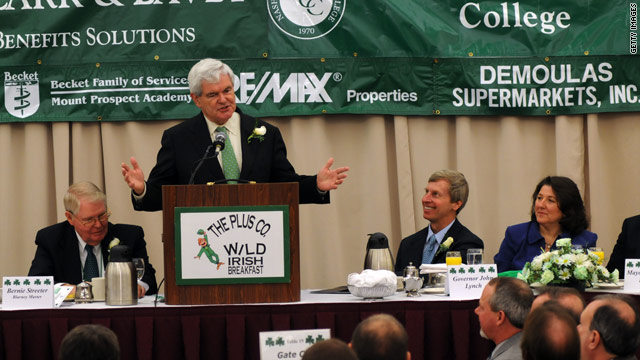 Of the president, Gingrich said "Theodore Roosevelt said you have to walk softly and carry a big stick. This is a guy who talks loudly and has no stick."

He was referencing Obama's action, or perceived lack thereof, regarding Libya, during an interview with local affiliate WMUR that followed the possible presidential candidate's appearance at an event in New Hampshire.

Gingrich also made other presidential comparisons to Obama, saying, "You can't imagine a bigger gap in effectiveness between President Obama and Presidents Eisenhower and Reagan."

"President Obama said on March 3, 'Gadhafi has to go. If the leader of the most powerful country in the world says that, then he'd better figure out a way to make it happen."

When asked about his personal life – particularly his two divorces, Gingrich responded that "total scrutiny" of presidential candidates should be expected, but he should be judged on the totality of his life, a similar response to previous appearances he's made.

"I think people have to look at the totality of my life. On balance is this a person that you think has learned enough and done enough and who understands the mistakes of the past and you can trust him and I think people are going to have to render judgment and they should," he said.

And he admitted to facing his own mistakes, stating, "Whatever I've done in the past that was wrong I have both repented and sought forgiveness and reconciliation with God. And I think people have to decide am I now a person who has learned from all that they can trust."

But when asked about whether he can be seen as an establishment candidate if he decides to run, Gingrich claimed the opposite.

"On the one hand I actually know how Washington works," he began. He then backtracked, saying "I was never a Washington insider in the traditional sense… I do think in that sense I'm probably an unusual blend of experience and outsiderdom simultaneously."

The potential GOP contender said he plans to make a decision in 4-5 weeks and acknowledged that he'll be returning to the first-in-primary state at the end of the month.