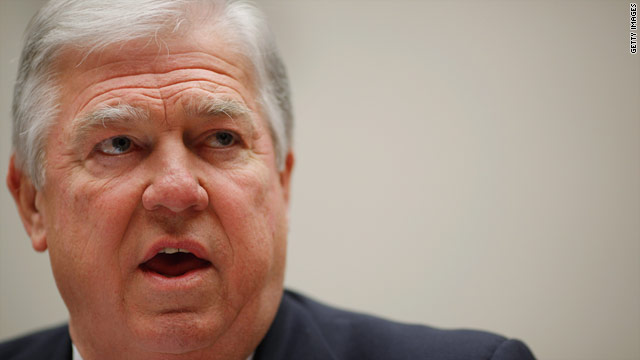 The state's two legislative chambers-the House, controlled by Democrats, and the Senate, which has Republican majority–are engaged in a political tug-of-war over how the new state House districts should be drawn.

Traditionally, each house of the Mississippi legislature presents its own redistricting plan, and the other chamber approves.

The controversy centers around the proposal drawn by state House Democrats. Members of the Republican Senate as well as the Republican Governor (Barbour) are opposed to the House's plan.

"The House plan fairly represents the racial makeup of the state of Mississippi," Derrick Johnson, president of the state chapter of the NAACP, told CNN in an interview. He called Barbour's position "offensive."

Barbour, who only has weighed in a few times over the controversy, said the House proposal would leave many residents without fair representation.

"The House plan would pack nearly 30,000 more Mississippians in 35 existing districts currently held by Republicans than mathematically should be included in those districts," Barbour said in a letter to Senate Republicans this week. He added that the proposal would ignore population growths in several counties.

On Thursday the state Senate voted to send the issue to a conference committee, but the House Speaker has said he will not appoint members to that panel, effectively stalling the proposal, according to the Clarion-Ledger newspaper.

The NAACP has filed a federal lawsuit naming Barbour and several other state officials as defendants.

The civil rights group is asking a U.S. District Court Judge to prevent the current districts from being used in this year's elections because it claims they are "unconstitutionally malapportioned and violate rights" guaranteed by the 14th amendment, the equal protections clause of the Constitution.

A spokeswoman for Barbour had no comment regarding the suit.

"The Senate has adopted and passed their plan and was also adopted in the House chamber this week. The issue at hand is the current House plan that the Lt. Governor and a majority of the Senate believes need further deliberation. This is what the conference process is for and the Lt. Governor is hopeful conferees can work on a much better plan that what is currently proposed," spokesman for Lt. Gov. Phil Bryant told CNN.

The back and forth over redistricting comes as Barbour has found himself in the middle of several controversies regarding race.

"It's all tactics by Governor Barbour, an attempt to hijack the election process so Republicans can take over the House. And in Mississippi there's a strong correlation between party and race," Carroll Rhodes, an attorney for the NAACP, told CNN.

Barbour's spokeswoman said she had no comment regarding criticisms.

Barbour announced in February he would not sign a bill that would honor a former Confederate general and former Ku Klux Klan grand wizard with a license plate after some hedging on his position.

He also created some headlines in December when he told the Weekly Standard magazine "I just don't remember it being that bad" recalling his growing up in segregated, 1960s Yazoo City, Mississippi. Barbour later had to issue a statement explaining his point was that his town was less tolerant of the group than others in the state but also said "nobody should construe...I think the town leadership were saints, either. Their vehicle, called the 'Citizens Council' is totally indefensible."