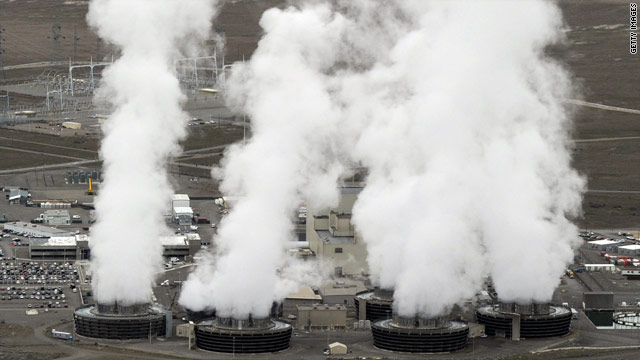 Fifty-seven percent of people questioned in the poll say they approve of the domestic use of nuclear energy, with 42 percent opposed.

"Attitudes toward nuclear power in the U.S. are more positive than they were after Chernobyl in 1986, when only 45 percent approved of nuclear energy plants, or Three Mile Island in 1979, when 53 percent approved of nuclear energy and the number who said nuclear plants were not safe was 10 points higher than today," says CNN Polling Director Keating Holland.

The survey indicates that 53 percent of the public opposes building more nuclear power plants in the U.S., up six points from last year. Forty-six percent support the construction of new plants.

What about the existing nuclear power plans in the country?

Sixty-eight percent say continue to operate all of them, with 27 percent saying that some should be shut down and one in ten calling for all of the plants to be closed.

According to the poll, 28 percent say domestic nuclear power plants are very safe, with just over half saying they are somewhat safe and one in five saying they are not safe.

The numbers drop for plants located in earthquake zones or near oceans. Twelve percent consider plants in those locations very safe, with 42 percent calling them somewhat safe and 45 percent say they are not safe. But two-thirds say they are confident in the federal government's ability to handle a nuclear power plant crisis here in the U.S., with one-third saying authorities would not be able to deal with a nuclear power plant severely damaged by an accident or natural disaster, similar to what happened in Japan.

While a majority approve using nuclear power to produce energy, public opinion on nuclear energy has some negatives as well as positives.

"Despite assurances from public officials, most Americans say that it is likely that a dangerous amount of radiation from the damaged nuclear power plants in Japan will eventually reach the United States," adds Holland. "Plus, six in ten would find a nuclear plant in their community unacceptable. And 57 percent say that the U.S. should rely less on nuclear power for its future energy needs."