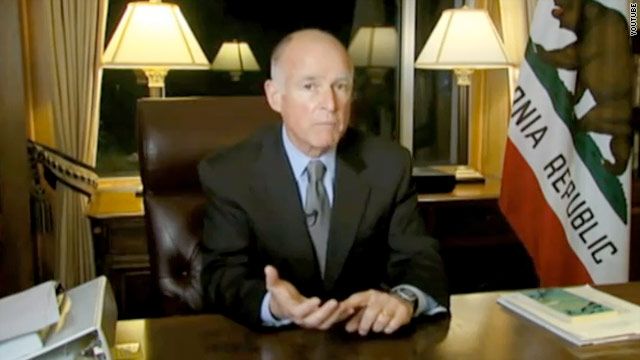 (CNN) Democratic California Governor Jerry Brown is calling for a special election on July 7th, where voters will decide between tax extensions or to double up on cuts in state services, in an effort to combat budget woes plaguing the state.

Brown highlights California's budget quandary in a YouTube video, where he places responsibility in the hands of California voters.

"In order to really put our books in balance we need to make drastic cuts" Brown said, adding that, "I don't want to do that, and I don't think it should be done to you without your voice," Brown said. "This is a matter that's too big, too irreversible to leave just to those who we've elected. This is a time when the people themselves can gather together in a special election and make the hard choice."

The state's budget gap of about $26.5 billion has haunted the nearly three months Brown has held his post as California's governor.

Part of Brown's solution to fill the budget gap is a five-year extension of tax increases on personal income, vehicle, and sales - a measure that was enacted two years ago.

"There has been a tendency to avoid reality and you can't do that forever," Brown said, adding that doubling cuts in state services would make some "drastic alterations in the very fabric of our public service."

Almost half of the gap thus far has been covered by extensive budget cuts that impact universities, the state's health care program, and welfare recipients.

Results of a Field Poll released last week show that a majority of Californians favor a special election to resolve the tax question.