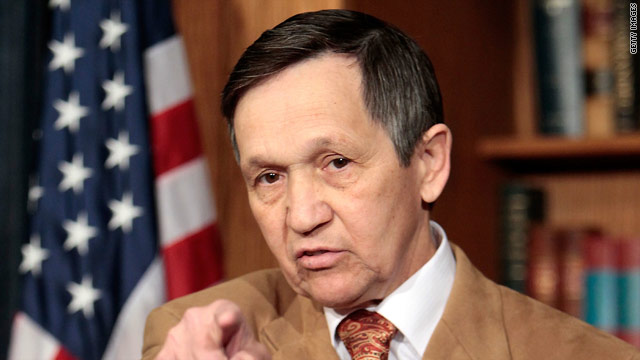 "Now the immediate thing that Congress needs to do when it returns is to cut off any funds for continuing in Libya and I intend to bring forward such an amendment," Kucinich said in an interview with CNN, noting any legislative action would have to wait until after the current Congressional recess.

Click to watch video
White House officials insist the President's actions are well within the law, pointing to a letter sent by Mr. Obama to House Speaker John Boehner Monday. The letter emphasizes the airstrikes are part of an international mission to enforce a "no-fly zone" authorized by a United Nations Security Council Resolution.

The letter, the administration argues, satisfies the War Powers Act which requires the President to inform Congress within 48 hours of engaging in any military action.

"Our view is a mission of this kind which is time limited, well defined and discreet clearly falls within the president's constitutional authority," said Deputy National Security Advisor Ben Rhodes at a press briefing Monday.

Rhodes noted President Obama is following the lead taken by his recent predecessors. "If you actually look at precedent, President Clinton pursued the intervention in Bosnia. He did not have congressional authorization but he did provide a letter consistent with the War Powers Act," Rhodes said.

Kucinich points to Article 1, Section 8 of the U.S. Constitution which places the power to "declare war" in the hands of Congress.

"It is very clear that what President Obama did is beyond what the Constitution permits a president to do. That really isn't disputable," Kucinich argued.

In a series of interviews on Monday, Kucinich suggested the President could be impeached for his actions. For now, the anti-war Democrat tells CNN he has no plans to initiate any impeachment proceedings.

One key Democrat in the Senate dismissed any notion of impeachment in a radio interview on Tuesday. Michigan Democratic Senator Carl Levin told the Bill Press Radio Show there is strong bipartisan support for the U.S. mission in Libya, dubbed Operation Odyssey Dawn.

"I think we ought to focus on what the issues are here," Levin said.

Still, Kucinich has the support of several Republicans who want a closer examination of President Obama's actions in Libya.

"My main argument is we don't have the authority. And when we get involved, it generally very rarely does much good," said Paul in an interview on CNN's Anderson Cooper 360.