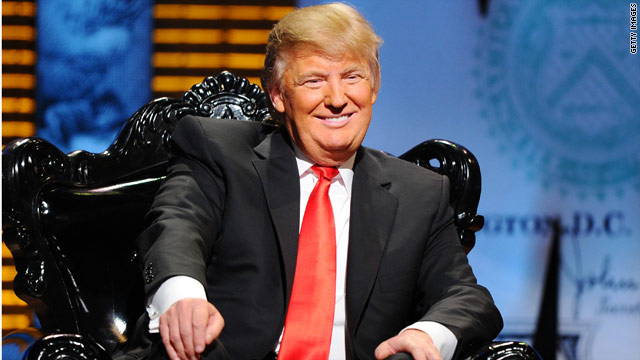 Washington (CNN) - If Donald Trump decides to run for the White House, he would just barely crack double digits in the crowded field of potential GOP candidates, but his entry into the race could hurt former Alaska Governor Sarah Palin, according to a new national poll.

A CNN/Opinion Research Corporation survey released Wednesday also indicates that Democrats may have started to close the enthusiasm gap that plagued them in last year's midterm elections.

Ten percent of Republicans and independents who lean Republican say they would most likely support Trump for the GOP's 2012 presidential nomination.

Rep. Ron Paul of Texas, who also ran for the Republican nomination in the last presidential election, is at eight percent, with everyone else in the low single digits.

"Adding Trump to the list of potential candidates doesn't change the GOP standings all that much, since Trump seems to pull his support equally from all the other major candidates," says CNN Polling Director Keating Holland.

But what if Trump decides not to run?

"Removing Trump's name from the list and allocating his voters to their second choice gives Huckabee 21 percent and Romney 19 percent - essentially unchanged from January. In a Trump-less field, Gingrich gets 15 percent, up from 10 percent in January, and Paul goes from 7 percent to 11 percent. Palin is the big loser, dropping from 19 percent in a no-Trump round in January to just 13 percent now," adds Holland.

The poll's release comes just a few hours after word that the businessman, real estate giant, and reality TV star, who is seriously considering a bid for the Republican presidential nomination, will head to Iowa in June to headline a major GOP dinner. Iowa plays a crucial role in the race for the White House, as its caucuses traditionally kick off presidential primary and caucus season.

Trump, who has said he will decide by June on whether he'll run for president, is also scheduled to speak that month at a political event in New Hampshire, which holds the first primary on the road to the White House.

The poll also indicates that 56 percent of Democrats say they are extremely or very enthusiastic about voting in the next election, up 22 points from last October. Sixty-two percent of Republicans say they feel the same way, up 12 points from last October, just before the midterm elections. That means the GOP's 20 point lead on enthusiasm has narrowed to a six point advantage.

In 2008, 79 percent of Democrats said they were extremely or very enthusiastic about voting, far ahead of the Republicans. That helped produced a high Democratic turnout that helped sweep President Barack Obama into the White House and widened the party's majorities in Congress. The 20 point enthusiasm advantage for the GOP last year helped the party win back control of the House of Representatives and narrowed the Democrats' majority in the Senate.

"Keep your eye on this measure - it has been a good predictor in the last two election cycles and it may help us figure out what's going on next year as well," adds Holland.

The survey also indicates that just over three quarters of Democrats and independents who lean Democratic say the party should re-nominate Obama next year, with just over one in five saying another Democrat should be the party's nominee. Those numbers are basically unchanged over the past couple of months.