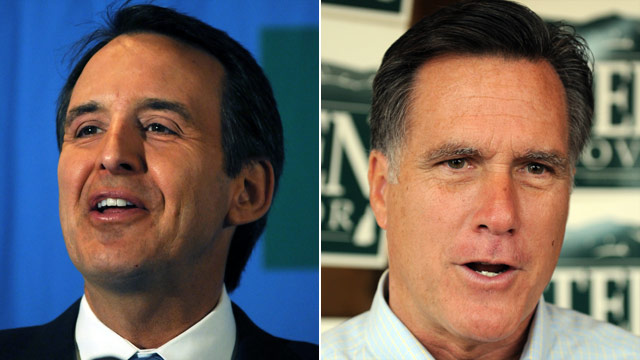 But for Romney, who pioneered statewide health care reform during his gubernatorial term in Massachusetts, the issue of health care has proved politically troublesome.

Pawlenty, who announced the formation of a presidential exploratory committee in a Facebook note Monday, said Wednesday in a statement, "Obamacare takes our health care system in the wrong direction, failing to reduce costs and improve quality."

He slams the law, stating that he joined a lawsuit challenging it on the grounds that it is unconstitutional because it "infringes on individuals' and states' rights."

"If courts do not do so first, as President, I would support the immediate repeal of Obamacare and replace it with market-based health care reforms," Pawlenty declared.

Romney, who sought the GOP nomination for president in 2008, wouldn't wait for courts to act. In the National Review's multi-author conservative blog, The Corner, Romney said Tuesday, "If I were president, on Day One I would issue an executive order paving the way for Obamacare waivers to all 50 states."

Stating that the "ultimate goal" is to repeal the health care reform law, Romney continues, "But since an outright repeal would take time, an executive order is the first step in returning power to the states."

Romney has come under fire recently for shared similarities between the Massachusetts plan that he implemented and the year-old national health care law including an individual mandate that requires all residents, with some exceptions, to have health insurance or pay a tax penalty. His critics include some fellow conservatives, including his peers in the 2012 presidential hopeful pack. President Obama also praised the plan, in a not-so-obvious political dig.

And Romney himself seemed to stage a pre-emptive rebuttal to likely criticism in the blog post by saying "Under our federalist system, the states are "laboratories of democracy." They should be free to experiment. By the way, what works in one state may not be the answer for another."

Former House Speaker Newt Gingrich, also mulling a bid for the presidency, weighed in on the first anniversary of health care reform with a policy-focused explanation of where Democrats went wrong. In an e-mail sent to supporters Gingrich accused Democrats of passing the bill in a "sneaky underhanded way." Though he didn't offer his own if-I-were-president solution, he called on House Republicans to "attach the full repeal of Obamacare to the debt ceiling increase bill and pass it immediately" because "making Obamacare a central issue in the budget fight is the best way to force President Obama to confront our debt crisis head-on."

A new CNN/Opinion Research poll released Wednesday indicates that attitudes toward the national health care plan have remained unchanged over the past year. A little over one-third of Americans–37 percent–support the measure and almost six in ten oppose it. That's basically unchanged from last March, when 39 percent supported the law and 59 percent opposed the measure.