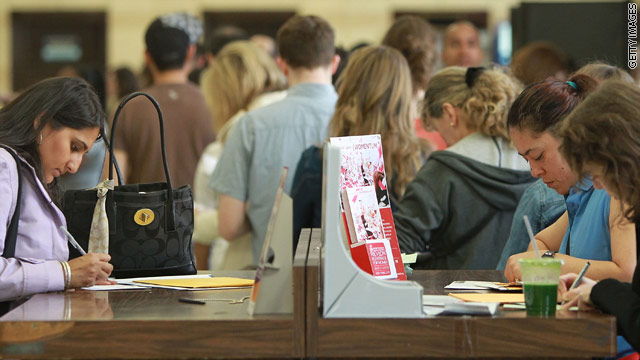 Washington (CNN) - For some Americans, D-Day is "Tax Day."

April 15 is traditionally a date of national importance, as many Americans rush to beat the deadline for filing tax returns. Now the date has taken on a new political importance.

For many conservatives, April 15 has become a day to protest taxes they deem too high and government, they feel, has run amok. This year, with presidential contenders jockeying for attention, many contenders are likely poring over their schedules to assess where they'll get media exposure and face time with conservative voters.

This year's actual tax return filing deadline has been extended to April 18, a Monday. But conservative activists are still planning to rally on Friday the 15th and over that weekend.

Conservative radio talk show host Herman Cain will join them at that event. But the former Godfather's Pizza CEO will also get more face time with activists by appearing at a rally in Orlando that evening. Cain will be joined by Florida Republican Sen. Marco Rubio and longtime conservative activist Ralph Reed of the National Faith and Freedom Coalition.

Minnesota Rep. Michele Bachmann will attend a fundraiser in the evening in South Carolina, home of the first Southern GOP presidential primary. She will also attend other events in the Palmetto State, over the weekend, to mark the "Tax Day" protests.

Rep. Ron Paul is a popular figure at many Tea Party-type rallies on "Tax Day." According to a spokesman, he's besieged with requests to attend various events.

"He's received a couple of really intriguing invitations and he has yet to decide where he's going to be," Jesse Benton told CNN. Benton serves as the Texas lawmaker's political director.

"You can generalize them as Tea Party [invites]. I think, a lot of times, the folks that self identify as Tea Parties have kind of fused themselves with the traditional folks that get out and want to raise awareness on Tax Day," Benton added.

While those presidential contenders have firm plans for the day, others appear to recognize the day's importance to conservatives. And yet, some of the potential candidates are undecided while at least two have as yet decided against attending any events.

Former Arkansas Gov. Mike Huckabee is not planning to attend any rallies. Instead, he'll be in New York taping for his show on Fox News.

"I have every confidence, I'm sure, he'll be bringing it up on his show. It's just too big of a day not too," Hogan Gidley told CNN. Gidley is the executive director of HuckPac - Huckabee's political action committee.

Similarly, Indiana Gov. Mitch Daniels is not committed to any "Tax Day" events.

"Right now, there are no plans to participate in any of those rallies," the governor's Deputy Press Secretary Jake Oakman told CNN. "But of course, that could change as we get closer to that date."

Mississippi Gov. Haley Barbour's whereabouts on the all-important "Tax Day" are still being worked out.

"We haven't announced our schedule for that week yet," Paul Hurst, the governor's chief of staff, told CNN in an email.

Donald Trump often travels to Florida on weekends for other commitments and could do the same on the "Tax Day" weekend.

FreedomWorks has been a prime organizer of the "Tax Day" rallies that Tea Party groups began in April 2009. This year, the group is not planning a mass rally in Washington D.C., instead focusing on local events in various states.

Brendan Steinhauser, the group's director of federal and state campaigns, does not speak for any presidential contenders. Yet he predicts they will be involved on "Tax Day."

"There's no doubt in my mind that…Newt [Gingrich] and Palin and all these guys will be somewhere at some rally speaking," Steinhauser told CNN.

"I'm sure they're kind of waiting to see what their schedules look like and what the best opportunity is – biggest event, lot of media exposure in key states."