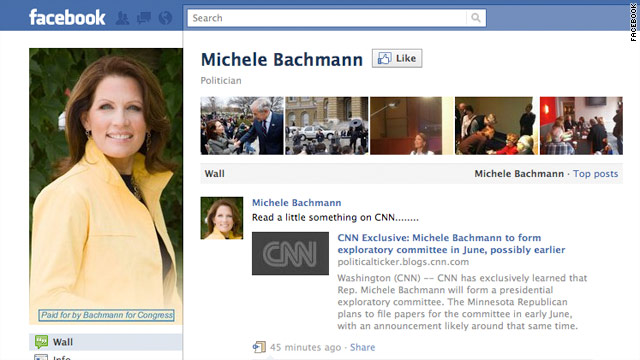 Washington (CNN) -Rep. Michele Bachmann is acknowledging with her supporters a CNN story about her presidential ambitions.

The Minnesota Republican has posted, on her Facebook page, the exclusive story that she plans to form a presidential exploratory committee in June, possible earlier.

"Read a little something on CNN…" Bachmann told her "friends" in a post on her page.

Though she has not officially made any announcement, the Facebook posting appears to be a tacit admission by the three-term congresswoman that she, in fact, will officially test the presidential waters in June, if not before.

It remains to be seen how a Bachmann bid would fare under the hot lights of a presidential primary. She recently received attention for a series of missteps and mishaps.

During her first swing through New Hampshire of the 2012 presidential season, the Minnesota Republican flubbed a historical fact: saying that the battles of Lexington and Concord in 1775 were fought in New Hampshire, instead of their actual location in neighboring Massachusetts. Bachmann later acknowledged the mistake, but blamed media bias for its widespread reporting.

During that same trip, protesters crashed a carefully choreographed event that Bachmann headlined. And after President Obama's State of the Union address, Bachmann was mocked for appearing to look off camera as she delivered a Tea Party response.

Still, the Republican lawmakers could be a force in a GOP presidential primary. She enjoys a wealth of support among grassroots, conservative activists, is a sought-after speaker for many Republican events and has done much work to build staffs – and relationships – in key, early primary states.