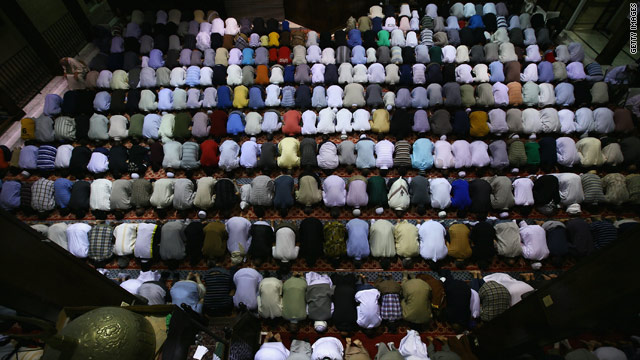 The CNN/Opinion Research Corporation survey released Thursday found 69 percent of Americans would be "okay" with a mosque in their area while 28 percent would not.

But there are big differences depending on where you live. Half of rural Southerners say they disapprove of a mosque in their neighborhood, while 42 percent say they would be "okay" with it. That rises to roughly three-quarters among those who live in cities and suburbs.

According to the American Civil Liberties Union, anti-mosque activity across the country, ranging from vandalism to lawsuits, has occurred in 21 states over the past five years.

Positive views of Muslim Americans are on the rise since 2002, according to the new poll, which found 46 percent of all Americans have a favorable view of American Muslims today, and 26 percent say they have an unfavorable view.

"Overall, positive views of American Muslims have risen since 2002, when memories of 9/11 were still fresh in most Americans' minds," says CNN Polling Director Keating Holland. "In 2002, as the first anniversary of the 9/11 attacks approached, only 39 percent of all Americans said they had a favorable view of Muslims."

When it comes to attitudes towards the Islamic faith, American opinions haven't changed much.
"In 2002, 28 percent of all Americans had a favorable view of Islam and 33 percent feel that way today," Holland says.