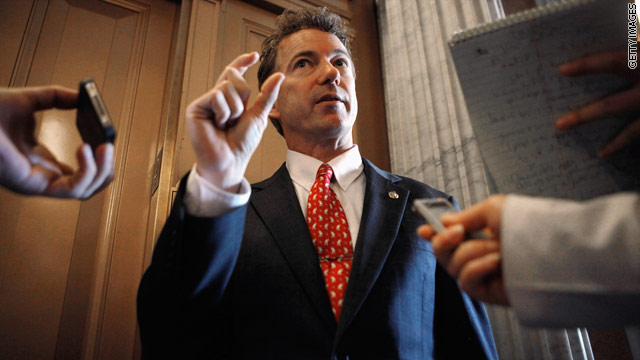 (CNN) - Republican Sen. Rand Paul of Kentucky said he will "think about" running for president in 2012 if his father, Republican Texas Rep. Ron Paul, decides not to launch a bid.

"The only decision that I've made is that I won't run against my father," Paul said Thursday speaking to the Louisville, Kentucky Rotary Club. "If he does not run, I have not ruled it out and I will think about it."

The Tea Party favorite's travel to early presidential nominating states has raised questions about the freshman senator's political intentions. Paul, who is scheduled to make trips to Iowa and New Hampshire in the coming weeks, said he's traveling to promote Tea Party stances and his book, "The Tea Party Goes to Washington."

But regardless of his ultimate decision, he said he wants his platform and the platform of the Tea Party represented in the next election.

"Our debt is a very serious problem and we need to address it," Paul said. "I think that position or platform needs to be represented by some candidate in 2012 and I want to at the very least influence who that candidate will be."

The elder Paul has said he is considering making a third presidential bid, but has yet to make a final decision.

Paul, an ophthalmologist, won election to the Senate in November beating Democrat Jack Conway with nearly 56 percent of the vote.