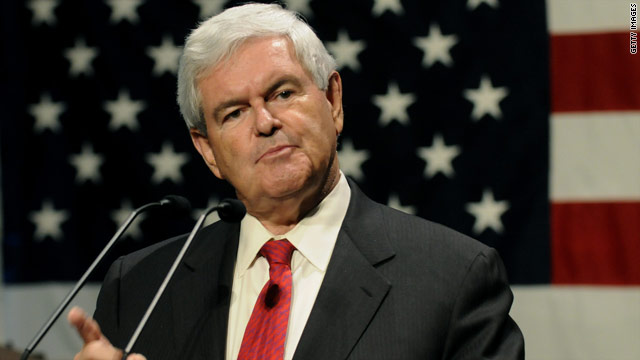 Gingrich goes back and forth on Libya

(CNN) - It appears GOP presidential hopeful Newt Gingrich was for a no-fly zone in Libya before he was against it.

During an interview on March 7 with Fox News, the former House Speaker was asked what he would do about Libya and he directly answered "exercise a no-fly zone this evening." And on March 17, while appearing at an event in New Hampshire, he accused President Obama of talking loudly and carrying no stick because he believed that Obama lacked a plan for Libya.

But recent comments indicate that Gingrich has changed tack.

Six days later in an interview on NBC's "Today Show" Gingrich, who's launched a website to explore a presidential bid, said "I think that two wars in Iraq and Afghanistan is a lot…I would not have intervened. I think there are a lot of other ways to affect Gadhafi."

And he's not backing down from the reversal. After being accused of flip-flopping on the Libyan issue, Gingrich posted a Facebook note the same day in defense of his comments on the morning show stating, "President Obama said publicly that 'it's time for Gaddafi to go.' Prior to this statement there were options to be indirect and subtle to achieve this result without United States military forces."

"The president, however, took those options off the table with his public statement," he continued. "That's why during a March 7th Greta van Susteren interview, I asserted that the president should establish a no-fly zone 'this evening.'"

The question posed to Gingrich, however, was not "What should Obama do" but rather, "What would you do about Libya?"

Then, during is appearance on the "Today Show," he said, "I think there were a lot of other ways to affect Gadhafi. I think there are a lot of allies in the region that we could've worked with. I would not have used American and European forces."

On Facebook, Gingrich asserted, "Now that we have US forces engaged, any result less than the removal of Gadaffi from power will be considered a defeat."

Politifact has rated Ginrich's conflicting comments as a "full flop."

But the flak he's receiving has not caused Gingrich to miss a step. At an event in Greenville, South Carolina Thursday, he went back to blasting the president's actions in Libya, calling him a "spectator in chief" and, according to Greenvilleonline.com, said, "The whole situation is a muddle."

Gingrich will be in Iowa, the country's first-in-the-nation caucus state, on Friday for an interview with Iowa Public Television.