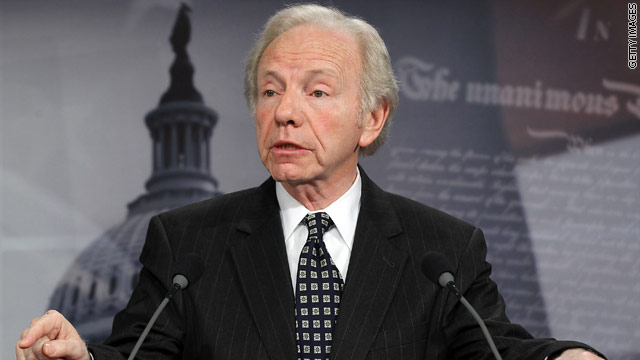 "If Assad does what Gadhafi was doing, which is to threaten and go house-to-house and kill anybody who's not on his side. There's a precedent now that the world community has set in Libya. And it's the right one," Lieberman, I-Connecticut, said on "Fox News Sunday." "We're not going to stand by and allow this Assad to slaughter his people like his father did years ago."

Protests in Syria over political and economic grievances were reportedly met Friday in Latakia, Daraa and Sanamen with open fire from government security forces and armed gunmen, leaving dozens of casualties.

Lieberman said Assad now has one choice: "To negotiate with the freedom fighters in Syria to create an entirely different government there."

Secretary of State Hillary Clinton said the United States deplores the violence in Syria, but does not expect intervention in the Middle East country.

"There's a difference between calling out aircraft and indiscriminately strafing and bombing your own cities, than police actions which frankly have exceeded the use of force that any of us would want to see," Clinton said Sunday on the CBS program "Face the Nation," comparing the situations in Syria and Libya.

Clinton said Syria's future remains unclear, but added there are reasons to be optimistic.

"There is a different leader in Syria now. Many of the members of Congress of both parties who have gone to Syria in recent months have said they believe he's a reformer," Clinton said.

Republican Sen. John McCain of Arizona said that given the apparent success thus far in Libya, "this is a moment of historic proportions."

"This will give us a golden opportunity to help with democracy and freedom throughout the Arab world," McCain said on "Fox News Sunday." "It's going to be very complicated and complex in that some of these countries that have never known a modicum of democracy, or even national unity. Egypt is the key. Do not take our attention off Egypt, the center of the Arab world."