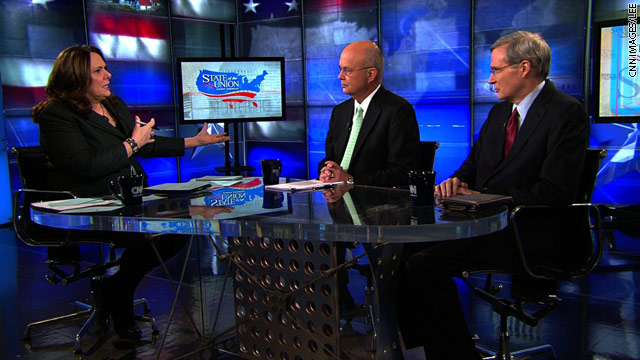 Sen. Carl Levin (D), Chairman of the Armed Services Committee, on CNN's "State of the Union"
"There's other means for moving Gadhafi than military. We've seen that in other countries as a matter of fact. We saw that in Egypt where the people of Egypt removed their dictator. The people of Libya can remove their dictator. But we are not the ones to remove him. We are the ones that is part of an international coalition that are going to prevent him from massacring his own people."

Former CIA Director Gen. Michael Hayden (Ret.) on CNN's "State of the Union"
"Frankly, Candy, there [are] capabilities that only we have. If there is any stress in this mission when it comes to electronic warfare, jamming, suppressing enemy air defense, refueling, intelligence, surveillance, reconnaissance, combat search and rescue, precision strike, there's no one in our class within NATO. So those are the American forces conducting those actions."

Douglas Holtz-Eakin, Former Director of the Congressional Budget Office on CNN's "State of the Union"
"…Libya's not really the concern. That's not what markets are pricing. It's the broader Middle East. Libya is 2% of oil supplies. That's not our problem. It's what happens in the rest of the Middle East."

Alice Rivlin, Former Director of the Office of Management and Budget on CNN's "State of the Union"
"What worries me most…is our looming debt crisis. We've got to get past this squabbling over the federal budget for this fiscal year. That's just a squabble. But what is really important is that we're moving into a period when we will have debt rising rapidly because of the retirement of the baby boom generation and high medical care costs. And we've got to do something about that. It's got to be bipartisan, and we've got to do it soon so that we reassure our world creditors that we're on the job. "

Defense Secretary Robert Gates on NBC's "Meet the Press" on arming rebels in Libya
"The Security Council resolution would permit it. The second resolution, 1973, would permit it. But no decisions have been made by our government about it."

Former National Security Adviser Stephen Hadley on CNN's "State of the Union"
"I think we do need to consider arming the rebels and let them - with anti-tank weapons and anti-aircraft weapons, let them impose their own no-fly zone. In the end of the day, how this ends is when the Libyan people can overthrow the tyrant, that's the narrative we want to establish."

Secretary of State Hillary Clinton on ABC's "This Week"
"We would welcome congressional support, but I don't think that this kind of internationally authorized intervention, where we are one of a number of countries participating to enforce a humanitarian mission, is the kind of unilateral action that either I or President Obama were speaking of several years ago. I think that this had a limited timeframe, a very clearly defined mission, which we are in the process of fulfilling."