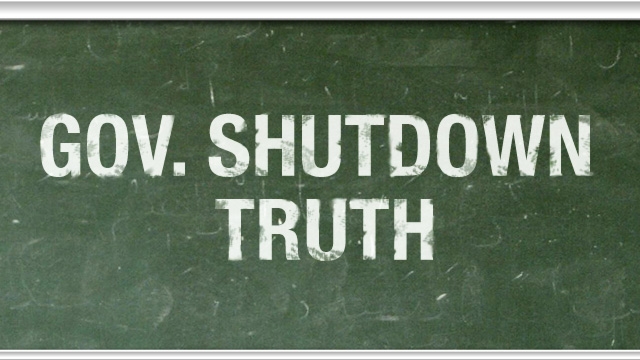 Capitol Hill (CNN) – Consider this a spending battle intervention. Congress has two weeks to come up with another spending bill or government will shut down, sending millions of federal workers home and delighting producers of Sunday talk shows.

Instead of focusing on the potential Smithsonian-closing drama, this week American Sauce offers a cut-to-the-chase map of the spending battle reality.

Congress may get its closest yet to a shutdown and we explain why, without adding exclamation marks about passport offices shuttering.

Want to cut through all the jibber jabber and get your hands around the spending battle that could shut down government? Listen to our podcast here.

Or keep reading for a few bullet points.

-The Basic Problem: Is the federal deficit and the national debt it feeds. Republicans, Democrats and economists almost universally agree it must be cut or the mounting debt will threaten fiscal stability.

-The Political Problems: There are two. 1. Democrats say it’s too soon to sling dramatic budget cuts, saying it could hurt the economy. President Obama and others want to wait until the next fiscal year (starting Oct. 1). But Republicans want deeper cuts, immediately. They argue tough measures are overdue. (See below for each party’s stance in dollars.) 2. Republicans and Democrats fundamentally disagree about what sorts of things should be cut.

There are two estimates. The White-House-run Office of Management and Budget forecasts this year’s (fiscal 2011) deficit will be $1.65 Trillion. The Congressional Budget Office puts it at $1.4 Trillion.

These came in the two most recent temporary spending bills passed by Congress. Those cuts included some of the political low-hanging fruit: programs which President Obama had already put on the chopping block and billions in unspent earmarks.

House Republicans passed a $61B cut from last year’s spending in February. That plan died in the Senate.

Congressional Democrats initially pushed for $0 in immediate spending cuts (compared to last year’s spending). They most recently agreed to the $10B in cuts passed by Congress. But Monday, our @DanaBashCNN reported from a senior Democratic source, that they are prepared to offer $20B in cuts.

Just being cautious here, because many of you already are aware of this nice bit of fun with statistics. Democrats and Republicans both have used (and still occasionally mention) larger estimates for their proposed cuts. Republicans say they are slashing $100B, Democrats point to $41B or $50B+ in cuts. In both cases, the parties are comparing their cuts to President Obama’s proposed budget, something which never went into effect and does not have direct bearing on current spending. Our advice: ignore those figures unless you, for some reason, want to compare current proposals with a White House proposal which is no longer on the table.

How much would these cuts do to melt the deficit? The GOP’s $61B in cuts would reduce the forecast deficit by 3.7 – 4.3 percent. A potential Democratic offer of $20B in cuts would chisel 1.2 to 1.4 percent off the deficit. We won’t bother with the effect on the national debt. It’s teeny. (Though comment below if you’d like the numbers and we’ll respond.)

SO, what are the odds of a shutdown?

We won’t pretend that anyone knows for sure, but to hear the current thinking and forecast, listen to this week’s podcast here.