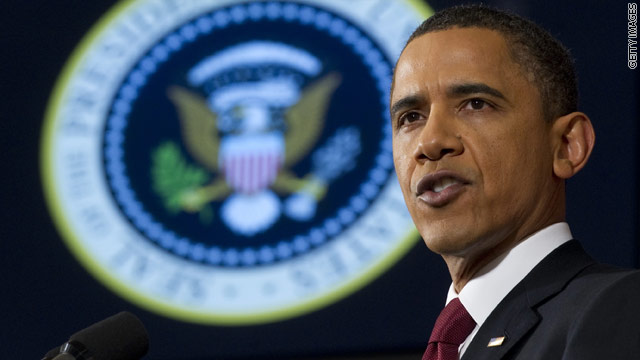 Washington (CNN) - President Barack Obama addressed the nation Monday night at the National Defense University in Washington, following calls from across the political spectrum for the U.S. leader to clarify America's role in the U.N.-authorized military mission in Libya. For live updates throughout the speech follow this live blog. Find a full write on the address here and a full transcript of the remarks here.

“It was helpful that the American people were able to hear from their Commander-in-Chief tonight. Unfortunately, Americans waited a long time to get few new answers. Whether it’s the American resources that will be required, our standards and objectives for engaging the rebel opposition, or how this action is consistent with U.S. policy goals, the speech failed to provide Americans much clarity to our involvement in Libya. Nine days into this military intervention, Americans still have no answer to the fundamental question: what does success in Libya look like?”

7:57 p.m. ET - President Obama ended his 27 minute speech with a push for democracy and freedom around the world.

"Let us also remember that for generations, we have done the hard work of protecting our own people, as well as millions around the globe. We have done so because we know that our own future is safer and brighter if more of mankind can live with the bright light of freedom and dignity."

7:55 p.m. ET - President Obama reiterated his comments in previous days that the people of Libya and other countries in the region will dictate changes, new leaders, etc. but said U.S. can help:

"The United States will not be able to dictate the pace and scope of this change. Only the people of the region can do that. But we can make a difference. I believe that this movement of change cannot be turned back, and that we must stand alongside those who believe in the same core principles that have guided us through many storms: our opposition to violence directed against one's own citizens; our support for a set of universal rights, including the freedom for people to express themselves and choose their leaders; our support for governments that are ultimately responsive to the aspirations of the people."

7:55 p.m. ET - Obama talked about the importance of U.S. participation with an international coalition to support change:

"The United States will not be able to dictate the pace and scope of this change. Only the people of the region can do that. But we can make a difference. I believe that this movement of change cannot be turned back, and that we must stand alongside those who believe in the same core principles that have guided us through many storms: our opposition to violence directed against one's own citizens; our support for a set of universal rights, including the freedom for people to express themselves and choose their leaders; our support for governments that are ultimately responsive to the aspirations of the people."

7:54 p.m. ET - @edhenrycnn: # Line that surprised me the most: President vows he will use military "swiftly, decisively and unilaterally" whenever necessary #Libya

7:53 p.m. ET - @edhenrycnn: # Most succint rationale of night? "We have intervened to stop a massacre"

7:52 p.m. ET - Obama explained to Americans why the U.S. is always helping other countries:

"Sometimes, the course of history poses challenges that threaten our common humanity and common security - responding to natural disasters, for example; or preventing genocide and keeping the peace; ensuring regional security, and maintaining the flow of commerce. These may not be America's problems alone, but they are important to us, and they are problems worth solving. And in these circumstances, we know that the United States, as the world's most powerful nation, will often be called upon to help. In such cases, we should not be afraid to act – but the burden of action should not be America's alone."

7:52 p.m. ET - The president reiterated why it was important for the U.S. to become involved as part of the international coalition to protect the citizens of Libya.

"…contrary to the claims of some, American leadership is not simply a matter of going it alone and bearing all of the burden ourselves. Real leadership creates the conditions and coalitions for others to step up as well; to work with allies and partners so that they bear their share of the burden and pay their share of the costs; and to see that the principles of justice and human dignity are upheld by all. That's the kind of leadership we have shown in Libya."

7:49 p.m. ET - The president said he doesn't want to repeat what happened in Iraq:

"Thanks to the extraordinary sacrifices of our troops and the determination of our diplomats, we are hopeful about Iraq's future. But regime change there took eight years, thousands of American and Iraqi lives, and nearly a trillion dollars. That is not something we can afford to repeat in Libya. "

7:48 p.m. ET - Obama laid out key argument for U.S. involvement, after Secretary of Defense Robert Gates this weekend deemed Libya not "a vital strategic interest" to the United States.

"America has an important strategic interest in preventing Gadhafi from overrunning those who oppose him. A massacre would have driven thousands of additional refugees across Libya's borders, putting enormous strains on the peaceful - yet fragile - transitions in Egypt and Tunisia."

7:48 p.m. ET - @edhenrycnn: Obama Doctrine? "As President I refuse to wait for the images of mass slaughter before taking action"

7:45 p.m. ET - The president argued that "America should not be expected to police the world," but that there are times when this country must step forward.

"It is true that America cannot use our military wherever repression occurs. And given the costs and risks of intervention, we must always measure our interests against the need for action. But that cannot be an argument for never acting on behalf of what's right. In this particular country – Libya; at this particular moment, we were faced with the prospect of violence on a horrific scale. We had a unique ability to stop that violence: an international mandate for action, a broad coalition prepared to join us, the support of Arab countries, and a plea for help from the Libyan people themselves. We also had the ability to stop Gadhafi's forces in their tracks without putting American troops on the ground."

"To brush aside America's responsibility as a leader and - more profoundly - our responsibilities to our fellow human beings under such circumstances would have been a betrayal of who we are."

7:43 p.m. ET - Obama announced the transfer of command of the mission in Libya to NATO. The transfer is scheduled for Wednesday.

"Our most effective alliance, NATO, has taken command of the enforcement of the arms embargo and No Fly Zone. Last night, NATO decided to take on the additional responsibility of protecting Libyan civilians. This transfer from the United States to NATO will take place on Wednesday."

7:40 p.m. ET - Obama made sure he was crystal clear that this was an international effort:

"In this effort, the United States has not acted alone. Instead, we have been joined by a strong and growing coalition. This includes our closest allies - nations like the United Kingdom, France, Canada, Denmark, Norway, Italy, Spain, Greece, and Turkey – all of whom have fought by our side for decades. And it includes Arab partners like Qatar and the United Arab Emirates, who have chosen to meet their responsibility to defend the Libyan people."

7:39 p.m. ET - @edhenrycnn: # President says he authorized US force after world was "confronted by this brutal repression" and "campaign of killing" by Gadhafi

7:38 p.m. ET - @edhenrycnn: #President says he authorized US force after world was "confronted by this brutal repression" and "campaign of killing" by Gadhafi

7:38 p.m. ET - The president stated why the U.S. joined an international coalition to use military force to impose a no fly zone over Libya and announced the coalition has stopped Gadhafi.

"We knew that if we (wanted) waited one more day, Benghazi – a city nearly the size of Charlotte – could suffer a massacre that would have reverberated across the region and stained the conscience of the world. It was not in our national interest to let that happen. I refused to let that happen. And so nine days ago, after consulting the bipartisan leadership of Congress, I authorized military action to stop the killing and enforce UN Security Council Resolution 1973. We struck regime forces approaching Benghazi to save that city and the people within it. We hit Gaddafi's troops in neighboring Ajdabiya, allowing the opposition to drive them out. We hit his air defenses, which paved the way for a No Fly Zone. We targeted tanks and military assets that had been choking off towns and cities and we cut off much of their source of supply. And tonight, I can report that we have stopped Gaddafi's deadly advance."

7:37 p.m. ET - The president gave the history of Gadhafi's aggression against his own people and those abroad- including Americans. He said "At this point, the United States and the world faced a choice. Gaddafi declared that he would show 'no mercy' to his own people. He compared them to rats, and threatened to go door to door to inflict punishment. In the past, we had seen him hang civilians in the streets, and kill over a thousand people in a single day."

7:37 p.m. ET - @edhenrycnn: #President says US reluctant to use force but "when our interests and values are at stake" must act

7:35 p.m. ET - The president listed all the actions that the U.S. took against Libya - evacuated the embassy in Tripoli, froze Gadhafi's assets, arms embargo through the UN, etc. Then he said, "I made it clear that Gadhafi had lost the confidence of his people and the legitimacy to lead, and I said that he needed to step down from power. "

7:33 p.m. ET - Obama explained why the U.S. became involved in the international coalition to impose a no fly zone over Libya:

"For generations, the United States of America has played a unique role as an anchor of global security and advocate for human freedom. Mindful of the risks and costs of military action, we are naturally reluctant to use force to solve the world's many challenges. But when our interests and values are at stake, we have a responsibility to act. That is what happened in Libya over the course of these last six weeks."

7:31 p.m. ET - President Obama started off concisely telling us the speech will contain three parts of the U.S. efforts in Libya- "what we have done, what we plan to do, and why this matters to us."