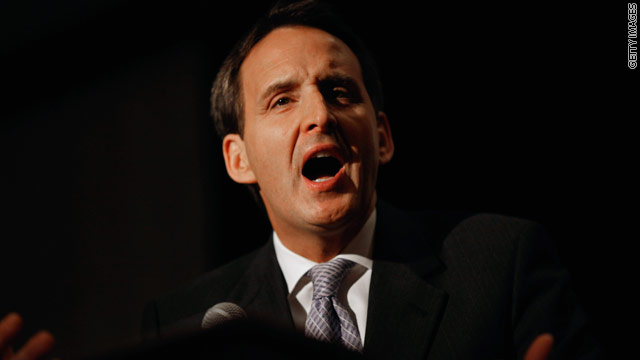 Washington (CNN) - Likely Republican presidential candidate Tim Pawlenty accused the Obama administration of "naivety" on Syria, as he called for the United States to recall its ambassador and toughen sanctions on the country.

Pawlenty's comments came in a radio interview on the Hugh Hewitt Show Monday evening, shortly before President Obama addressed the nation on the military operation in Libya.

"Our interests in Syria are at least as strong, if not stronger, than in Libya", Pawlenty said when asked what the United States should do after violent crackdowns on demonstrators in Syria. “Here you have a country (that has) enabled and accommodated people to go into Iraq and kill American soldiers. They house Hamas and allow them to exist in Syria as they continue to be a terrorist organization in Israel and elsewhere. And the list goes on and on about the problems that the Syria, and specifically Bashir Assad, has caused the region and the world and also the United States of America."

Pawlenty told Hewitt the U.S. needs a tougher stance on the Syria protests, first calling for President Obama "to speak strongly and clearly to the people of Syria that we hope and believe and support their drive towards freedom and getting rid of Bashir Assad.”

The former Minnesota governor, who last week launched an exploratory committee for a White House run, said the administration needs to recall Ambassador Robert Ford from Damascus. President Obama named Ford as Ambassador in 2009, four years after the U.S. withdrew its envoy in protest at the assassination of former Lebanese Prime Minister Rafik Hariri.

“President Obama made the mistake of sending an ambassador to Syria, legitimizing that country and his regime in ways that I don't think are appropriate. Recall the ambassador,” Pawlenty said.

In the interview, he also called for the United States to start invoking further sanctions on Damascus, “both economically and otherwise."

Palwenty called any belief that Syria and Assad could be peace agents in the region "a complete crock." He said it "shows the naivety of the Obama administration. And to have the secretary of state on a Sunday morning talk show implying that he's a reformer; to have his administration essentially embracing in any manner or degree Bashir Assad and Syria as a peace agent - or an agent for reform and stability in the region - is either ignorant or frighteningly misguided."

Secretary of State Hillary Clinton was asked on CBS' “Face the Nation” how the situation in Libya was worse than repression over the years in Syria, including by Assad's father. Clinton said, "There is a different leader in Syria now. Many of the members of Congress of both parties who have gone to Syria in recent months have said they believe he's a reformer. What's been happening there the last few weeks is deeply concerning."