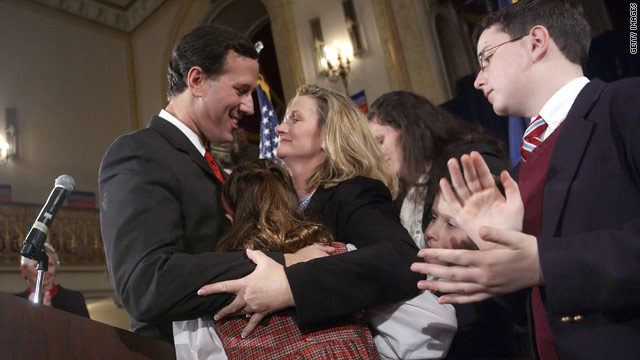 (CNN) - Former Sen. Rick Santorum, a probable GOP presidential candidate, canceled a trip to Iowa this past weekend because one of his children was very sick.

Aides close to the Pennsylvania Republican tell CNN that Santorum's daughter, Isabella Maria, became very ill on Friday. The three year old girl was born with Trisomy 18, a condition where a person is born with three number 18 chromosomes rather than the normal two. Many newborns suffering from this disease rarely survive beyond a week after birth, with those who do survive battling serious medical conditions.

Santorum was changing flights in Minneapolis on his was to Iowa when he was alerted that his daughter was very ill. Santorum quickly returned home, canceling his appearance at Rep. Steve King's Conservative Principles Conference Saturday in Des Moines. Santorum was scheduled to be one of six possible GOP White House contenders speaking at the gathering of conservative activists in the state which kicks off the presidential primary and caucus season.

Santorum headlines the Grafton County Lincoln Reagan Day Dinner in Lincoln, New Hampshire, Monday night, the first of five stops over two days in the state that holds the first primary in the race for the White House.

An aide close to Santorum tells CNN that the former senator is expected to speak out about the conflict in Libya, second amendment rights, and taxes. The aide tells CNN that since Santorum is so outspoken on social issues, there's been a tendency by some people to see the former senator only through that prism. But the aide says that they want to make sure that people understand Santorum's full spectrum. They say people may not realize that the former lawmaker has lots of experience when it comes to international and military affairs, serving for eight years on the Senate Armed Services committee.

If Santorum formally jumps into the race for the White House, as expected, he could face a number of better funded opponents with larger national political operations.

Polls over the past year months indicate that Santorum registers in the low single digits nationally among Republican voters when it comes to the choice for their party's next presidential nominee. Still, due in part to his strong opposition to abortion rights, Santorum remains popular with many socially conservative voters who have long had an influential role in the GOP primary process.