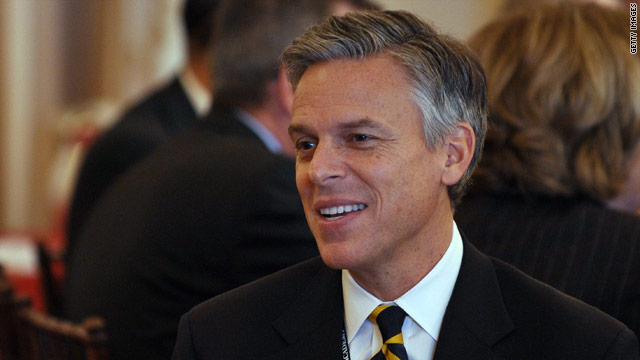 (CNN) - Supporters of Republican Jon Huntsman have all but put together a presidential campaign-in-waiting for the U.S. Ambassador to China when he officially leaves his post next month, but Huntsman's younger brother says 2012 might not be the right year.

Speaking to Bloomberg News, Peter Huntsman confirmed his older brother is definitely interested in a White House bid. But whether that means a campaign later this year has not been decided.

"He is interested at some point," the younger Huntsman said of his brother's presidential ambitions. "That's not necessarily in 2012."

Peter Huntsman, who at 48 is three years younger than his brother, is CEO of Huntsman Corp., a chemical company founded by their father which has made both men significantly wealthy. The younger Huntsman said he voted for President Obama in 2008 but suggested his brother would prove to be a formidable opponent.

"There is a real need in this country for a politician who can have a focus on economic progress and economic development and deficit reduction," he said.

Huntsman has told the Obama administration he will resign his post on April 30, and his advisers say a decision about the presidential race will come sometime this summer. Huntsman was in his second term as Utah governor when he stepped down in 2009 to become U.S. ambassador to China.

A string of veteran political hands led by former John McCain adviser John Weaver is laying the groundwork for a presidential campaign if Huntsman decides to run. The groups political action committee, Horizon PAC, is registered to an address on Pennsylvania Avenue in Washington and has hired communications staffers, a congressional liaison and a legal counsel.