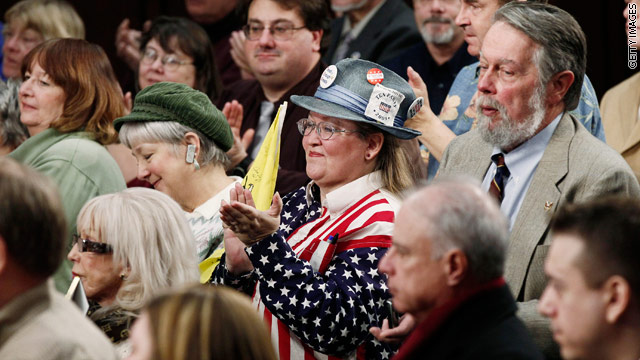 CNN Poll: Unfavorable view of tea party on the rise

Washington (CNN) - Nearly half of all Americans have an unfavorable view of the tea party movement, putting it in the same company as the Democratic and Republican parties, according to a new national poll.

A CNN/Opinion Research Corporation survey released Wednesday indicates that 32 percent of the public has a favorable view of the two year old anti-tax movement, which also calls for less government spending and a more limited role for the federal government. The 32 percent favorable rating is down five points from December.

Forty-seven percent of people questioned say they have an unfavorable view of the tea party, up four points from December and an increase of 21 points from January 2010. That 47 percent is virtually identical to the 48 percent unfavorable ratings for both the Democratic Party and the Republican Party in the same poll.

"This is the first time that a CNN poll has shown the tea party's unfavorable ratings as high as those of the two major parties," says CNN Polling Director Keating Holland. "It looks like the rise in the movement's unfavorable rating has come mostly among people who make less than $50,000."

The tea party movement's unfavorable rating rose 15 points since October among lower-income Americans, compared to only five points among those making more than $50,000. Roughly half of all American households have incomes under $50,000, and half make more than that.

"It's possible the drop among lower income Americans is a reaction to the tea party's push for large cuts in government programs that help lower-income Americans, although there are certainly other factors at work," adds Holland.

The tea party was born in early 2009, as a protest movement against the Troubled Asset Relief Program, better known as TARP or the Wall Street bailout, which was implemented by President George W. Bush in the autumn of 2008, and against the federal stimulus plan, officially known as the American Recovery and Reinvestment Act that President Barack Obama passed through Congress in early 2009. The grassroots movement became a player in Republican Party politics over the past two years and tea party activists were instrumental in helping the GOP win back control of the House and narrow the Democrats' majority in the Senate in last November's midterm elections.