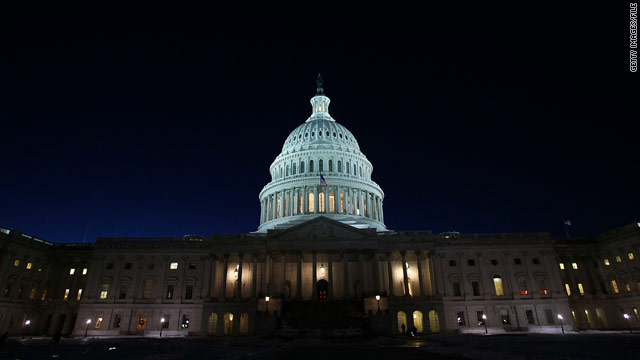 Sources from both parties–who would not speak on the record about the closed-door talks–emphasized the numbers were not set in stone and could change as negotiators hammer out details of which programs and agencies to cut and whether a number of controversial policy provisions are included in the agreement.

Informal negotiations have been going on in fits and starts. Despite the newfound progress, the government runs out of money April 8, and House Republicans Wednesday moved to deflect blame for a possible government shutdown.

House GOP leaders announced they would vote this week on a bill enacting their proposed cuts, if there is no agreement before next week's deadline.

The vote would be symbolic, since the Senate already rejected the House-passed bill that would cut $61 billion in government spending, and President Obama said he would veto it. But House Republicans vowed to move ahead with the vote, dubbed the "Prevention of a Government Shutdown Act," should discussions among Speaker John Boehner, Senate Democratic Leader Harry Reid, and the White House fail.

"We are serious. We want to take care of this problem and so that we can get on about the business of this nation and get Americans back to work." House Majority Leader Eric Cantor told reporters. Cantor said the bill would also mandate that Members of Congress not get paid if there is a government shutdown.

Reid said Tuesday that Senate Democrats are offering to cut another $19 billion in spending cuts, on top of the $10 billion that was cut in two stopgap bills passed to keep the government running. But when asked by CNN about Reid's offer House Speaker John Boehner maintained "it doesn't exist." Pressed about Reid's invitation to review additional cuts, Boehner said, "It's nonsense."

House Republican leaders know full well many of their rank-and-file conservatives will not be happy with any compromise on spending cuts beyond the $61 billion the House passed last month. One senior House GOP leadership aide indicated that the proposed $19 billion in cuts was unlikely to be enough to satisfy House Republicans.

That's why despite the behind-the-scenes talks, public posturing in this highly political drama continues.

At a news conference, Boehner continued to press Senate Democrats to act soon, telling reporters "We've done our job. Now the Senate says we have a plan. Well great! Pass the damn thing and send it over here and let's have real negotiations instead of sitting over there rooting for a government shutdown."

Talks had broken down last week when House Republicans insisted the Senate use the House passed package of $61 billion in cuts as a starting point to develop a compromise, but top officials say they have continued to have informal discussions.

And Wednesday evening, in a late addition to his schedule, Vice President Biden was to head to Capitol Hill to meet with Senate Democratic leadership.