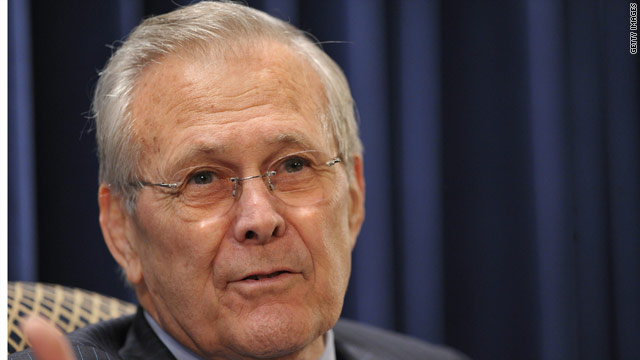 In an interview that aired Wednesday on CNN’s “John King, USA” Rumsfeld wouldn’t divulge who out of the potential candidates would garner his support, but he mused about the pivotal moment in time for a presidential election.

“They’re gonna have to deal with tough issues, with surprises. It’s gonna range from economic issues to social issues to foreign policy and defense issue, and it's a tough job running for president. They're gonna have to meet new issues and tough questions,” Rumsfeld told CNN’s King.

“Oh I think its kind of an unusual opportunity we have. We have ... no sitting president in our party, no sitting vice president, and no logical candidate who’d run before, so its a fresh, clean slate,” Rumsfeld said.

During the interview, Rumsfeld touched on other issues, including the situation in Libya. He also took a trip down memory lane, reminiscing about his years as a congressman when John F. Kennedy and Lyndon Johnson manned the White House. Rumsfeld was also White House chief of staff during part of the Ford administration and filled various roles for the Nixon administration.

Rumsfeld - who resigned from the Pentagon post the day after the 2006 midterm elections, when the Republican party lost control of Congress - published a memoir recently detailing his insights about the Bush administration, 9/11, and the wars in Afghanistan and Iraq.

Rumsfeld praised the Tea Party for “bringing more people into politics,” a sentiment he has vocalized before.

“I think it’s a healthy thing to have the Tea Party, myself,” Rumsfeld said, "I think that if you believe in democracy, having more people engaged and interested is a healthy thing.”