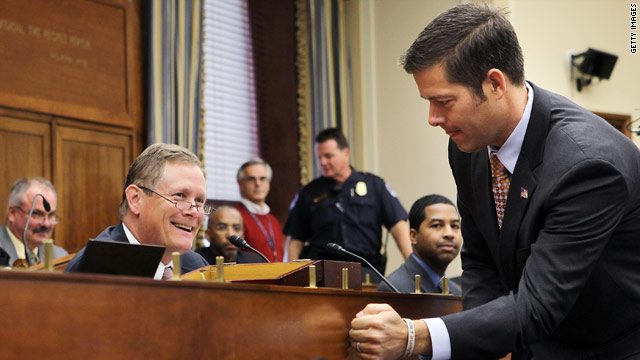 But Wednesday the Democratic Party of Wisconsin posted a flyer on their website advertising a food and clothing drive for "Poor Sean Duffy." Except the drive is billed as being sponsored by the Polk County Republicans, and the drive date? A telling April 1, 2011.

"Cutting benefits for working-class Wisconsin is hard work," it reads, imploring supporters to "Please give anything" from "French-cuffed shirts" to "oyster spoons" and "used cashmere."

"We're making fun with it but the real joke is on the residents in the north woods of Wisconsin," said Graeme Zielinski, spokesman for the Wisconsin Democratic Party. "This is a working-class district and he does not represent them well."

The drive date may be April Fools' Day, but everyone isn't laughing.

Duffy spokesman Daniel Son responded to the flap Wednesday when he told CNN, "Congressman Duffy wasn't complaining, he was simply pointing out that he's no stranger to tough times."

"He didn't run for Congress to get rich, he ran for Congress because he was increasingly concerned that the direction our nation was going would leave the next generation with an America that is less prosperous, less secure and less free. He is serious about facing our fiscal crisis head on, and he's not interested in scoring cheap political points – which is exactly what partisan Democrats are trying to do here with a misleading attack that distracts from the real issues at hand," Son stated.