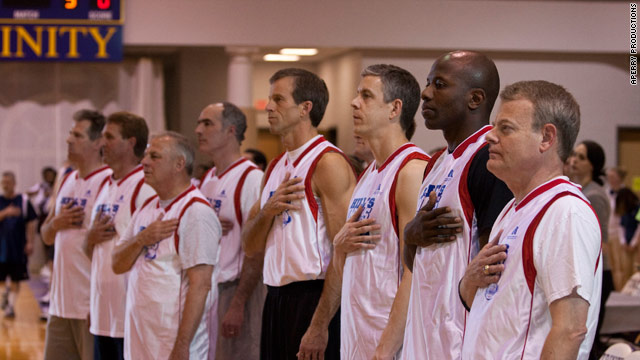 The 24th annual "Home Court" game raised over $400,000 for the Washington Legal Clinic for the homeless, according to event chair Jill Collins.

Swapping their tailored suits for jerseys and basketball shorts, the "Hill's Angels" congressional team gave took on the Georgetown law staff and won, 61-46.

Sen. John Thune, one of the evening's stars, scored 9 points and grabbed 8 rebounds. The Republican senator from South Dakota, who announced last month he would not seek the Republican presidential nomination in 2012, played basketball in high school and college.

In fact, Thune's interest in politics was sparked at a young age after making five of six free throws during a freshman high school basketball game, where he was greeted by a spectator who told him, "I noticed you missed one." The spectator happened to be well-known sports enthusiast and U.S. Representative Jim Abdnor. The introduction was the start of a friendship that ignited John's career in public service, AshLee Strong, Thune's Press Secretary told CNN.

"It was an honor to serve as a co-chair of the 24th annual Home Court charity basketball game. Last night's game was a great time, and raised valuable resources to help serve the homeless in our nation's Capitol," Thune said.

Another one of the team's assets was Republican Sen. Scott Brown, who had a game high of 15 points. U.S. Secretary of Education Arne Duncan was another all-star, helping the team score a win with nine points, event chair Collins told CNN.

The only dunk of the game came courtesy of special guest player, Reggie Love, the well-known personal assistant to President Obama.