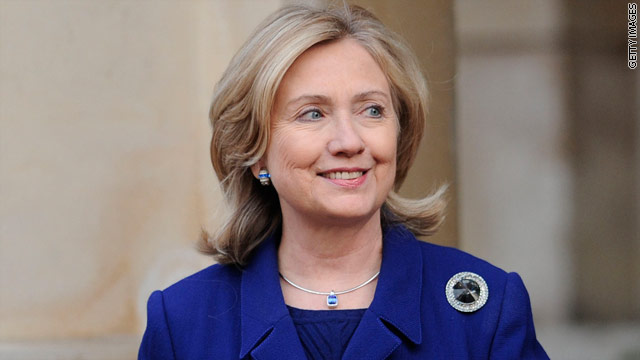 Washington (CNN) - Secretary of State Hillary Clinton hit a milestone Thursday, receiving her highest favorable rating since assuming her role in the Obama administration, according to a new poll.

The Gallup survey showed her favorable rating at 66 percent, up from 61 percent in July - a number that beat President Barack Obama, Defense Secretary Robert Gates and Vice President Joe Biden. The new figure was her highest rating to date since serving as chief diplomat and just one point below her all-time high of 67 percent in December 1998.

The former Democratic New York senator received a 65 percent favorability rating in the most recent CNN/Opinion Research Corporation survey released March 16, which showed a partisan divide. Nine out of ten Democrats and nearly two-thirds of independent voters said they had a favorable opinion of her; six out of ten Republicans said they had an unfavorable view of Clinton.

The results of the Gallup survey were also divided along party lines. Forty percent of Republicans, 62 percent of independents and 92 percent of Democrats had a favorable view of the former first lady.

The Gallup poll was conducted March 25-27, with 1,027 adults questioned nationwide and had an overall sampling error of plus or minus 4 percentage points.