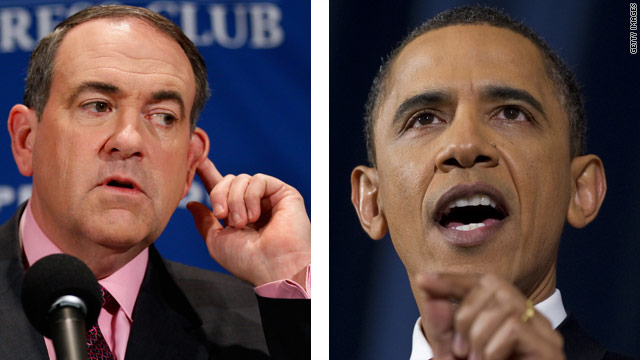 (CNN)-Former Arkansas Gov. Mike Huckabee would go toe-to-toe with President Obama if he sought the presidency in 2012, according to a new Fairleigh Dickinson University survey. Among registered voters nationwide, 46 percent said they'd vote for Huckabee and the same number would re-elect the president.

Former Massachusetts Gov. Mitt Romney, who is also considering another presidential run, only trailed the president by one percentage point. Voters favored the president 44 to 43 percent over Romney, who wrote a Wednesday op-ed attacking Obama's treatment of unemployment and job creation in USA Today.

And though he's declared his non-candidacy for president, New Jersey Gov. Chris Christie also performs well against the sitting president whom he trails by six percentage points. Registered voters chose Obama 46 to 40 percent over Christie. The governor has adamantly denied an ambition to helm the Republican ticket in 2012, but helped the House GOP earn $10 million in a DC fundraiser Wednesday night.

Other possible contenders for the Republican nomination saw less favorable results in a hypothetical matchup with Obama. More than half the nation preferred the president over former Alaska Gov. Sarah Palin - 54 to 34 percent. And Tim Pawlenty, who formally announced a presidential exploratory committee, fell behind Obama by 14 percentage points. Voters preferred the president 48 to 34 percent over the former Minnesota governor. Obama also led former House Speaker Newt Gingrich 52 to 37 percent in the theoretical race.

When it comes to first GOP presidential picks, more Republican registered voters don't know who they'd choose yet, according to the poll. Twenty-three percent said they're unsure or they'd prefer someone else to run as the Republican candidate than those named in the survey. But 21 percent were sure of Huckabee as their first choice and Romney came in a close second, receiving 20 percent support. Both potential presidential hopefuls benefited from a previous run for the highest office in the nation. Palin, who ran as the GOP vice presidential nominee in 2008, came in a distant third with 12 percent of registered voters saying they'd choose her to run as the Republican candidate for president.

The Fairleigh-Dickinson University poll was conducted from March 21-28, before the president's speech on Libya. Eight hundred registered voters across the country were questioned by telephone. The poll has a sampling error of plus-or-minus 3.5 percentage points.