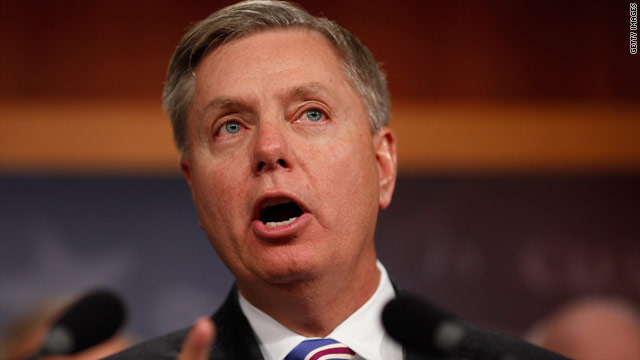 WASHINGTON (CNN) – More than a dozen Republican senators announced Thursday they would push for a constitutional amendment requiring Congress to pass an annual balanced budget.

"It's an historic day for the Republican Party. We all agree on something," Sen. Lindsey Graham, R-South Carolina, joked, as he spoke about the proposed amendment that has the support of all 47 Republican senators.

"A balanced budget amendment will make us do here what everybody has to do at home," Graham said during a news conference on Capitol Hill.

Previous attempts to pass a balanced budget amendment have failed, but backers hope they’ll fare better this year because of public concern over growing deficits.

The press conference was originally scheduled for earlier in March, but was postponed when Senate Minority Leader Mitch McConnell, R-Kentucky, decided to push for a unanimous Republican front for the amendment.

The amendment would require a balanced budget, a two-thirds majority to raise taxes, and three-fifths to increase the debt limit. Additionally, the proposal would limit government spending to 18% of GDP, which is below the average of 21 percent over the last 41 years, according to the Center on Budget and Policy Priorities, a liberal-leaning think tank.

The Republican proposal does allow for exceptions to a balanced budget in times of war or military conflicts, but does not allow for an exception in times of economic crisis. Critics argue that would mean it would be more difficult to pass a stimulus program during a recession.

"It is about the most irresponsible action imaginable," said Norman Ornstein, a resident scholar at the conservative American Enterprise Institute. "It would virtually ensure that an economic downturn would end up as a deep depression, by erasing any real ability of the government to pursue countercyclical fiscal policies and in fact demanding the opposite, at the worst possible time.”

The hurdles for adopting a constitutional amendment are high. Two-thirds of the House and Senate must vote in favor of an amendment and then at least 38 states must ratify it.

The constitution has only been amended 27 times, most recently in 1992.