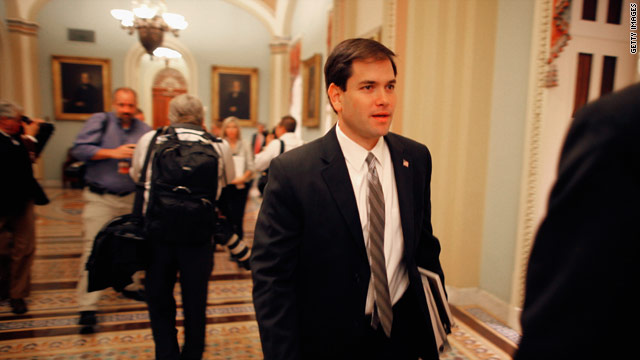 Washington (CNN) – Sen. Marco Rubio is laying out a strong stance against Libyan leader Moammar Gadhafi and taking aim at President Obama for not explicitly demanding a regime change in the warring country.
"When an American president says the guy needs to go, you better make sure that it happens because your credibility and your stature in the world is on the line," said the freshman senator in an interview with the conservative Weekly Review Wednesday.

Rubio, the fresh-faced senator from Florida widely regarded by many in the GOP as an up-and-coming rock star, and a possible pick for the No. 2 spot on the 2012 Republican presidential ticket, also sent a letter Wednesday to Sens. Mitch McConnell and Harry Reid - the top Senate Republican and Democrat respectively - calling on the chamber to consent to the president's intervention and clearly define the mission's goal as regime change.

In a nationally televised speech Monday, Obama said the NATO alliance would orchestrate the intervention going further and dismissed criticism that the Libyan mission fails to go far enough, particularly that Gadhafi's downfall is not a specific objective.

"If we tried to overthrow Gadhafi by force, our coalition would splinter," he said. "We would likely have to put U.S. troops on the ground to accomplish that mission, or risk killing many civilians from the air. The dangers faced by our men and women in uniform would be far greater. So would the costs, and our share of the responsibility for what comes next."