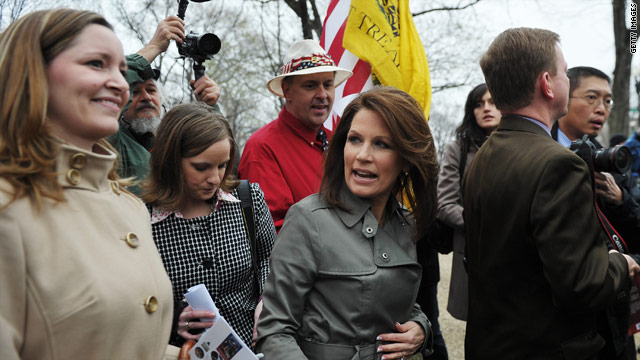 Tea Party activist to GOP: 'Take off your lace panties,' cut more from the budget

Washington (CNN) - Some conservative Tea Party activists attending a rally on Capitol Hill Thursday pushed for deeper cuts to the federal budget with many saying if more spending isn't slashed - they believe that government operations should go dark.

One activist - Kathy Dirr who resides in Speaker John Boehner's Ohio district - used stark language as she spoke to the crowd, urging House Republican leadership to, "take off your lace panties" and push for deeper cuts.

This comes as Democrats and Republicans continue to engage in the political equivalent of stare down negotiations over the budget.

At the rally, sponsored by the Tea Party Patriots, lawmakers and activists spoke to what appeared to be a few hundred supporters. Among the speakers were Representatives Steve King of Iowa, Michele Bachmann of Minnesota and Tea Party Patriots co-founder Jenny Beth Martin.

Another speaker, Republican Rep. Mike Pence of Indiana, echoed the sentiment of many conservatives.

"With a deficit this year of $1.65 trillion and a national debt of $14 trillion and a defiant liberal majority in the Senate, it is time to pick a fight," Pence thundered in front of the grassroots activists.

"If liberals in the Senate would rather play political games and shut down the government instead of making a small down payment on fiscal discipline and reform I say, shut it down," Pence added.

Pence's comments appear to be different than those of House Speaker John Boehner, who said it was Democrats that welcomed a shutdown.

Boehner talked to reporters on Thursday saying, "Now, here is the bottom line: Democrats are rooting for a government shutdown." He added, "We are listening to the people who sent us here to cut spending so that we can grow our economy. As I have said from the beginning our goal is to cut spending not shut down the government."

Fellow Republican Rep. Michele Bachmann of Minnesota took a similar tact as she spoke at the rally.

"[Democrats] They've got their fingers crossed right now that the government will shut down," Bachmann claimed. "That's their plan. They want to shut the government down and they want to turn you into their scapegoat and say it is the Tea Party's fault for shutting the government down. Now, the cat is out of the bag. We know who has no interest in negotiating. It's Harry Reid. It's the big liberals over in the Senate."

And yet the message from Bachmann and Boehner ran directly counter to those of some Tea Party supporters.

"We're very concerned about the fact that the Republicans in congress are not taking a strong enough stand in relation to insisting on serious budget cuts," Robin Maas, a Tea Party supporter, said. "I'm not the slightest bit worried about a government shut down. I think we find out that there are many things government does that we really don't need to keep this country going. And a government shutdown would actually save us some money."

"I don't want them to waive on this $100 billion cut to our budget. We need it bad," John Sanders, also a Tea Party supporter, said. "I want the $100 billion they [Republicans] promised us. I say shut the government down. Let's go for it."

Recent polling shows they are not alone.

A fresh CNN/Opinion Research Corporation survey asked if a government shutdown, for a few days, would be good for the country. Twenty-one percent of Democrats said yes, 35 percent of independents and 53 percent of Republicans agreed. But 62 percent of Tea Party supporters said a shutdown of a few days would do the country good.

Dirr told the crowd that she drove from Ohio last night to attend the rally.

"And to me that's like a house that's burning to the ground and the Republicans won't put out the fire because they're afraid that some water might splash on a nearby house. I say to the Republican leadership: take off your lace panties, stop being noodle backs, take a strong, bold, unwavering stand for the American people."