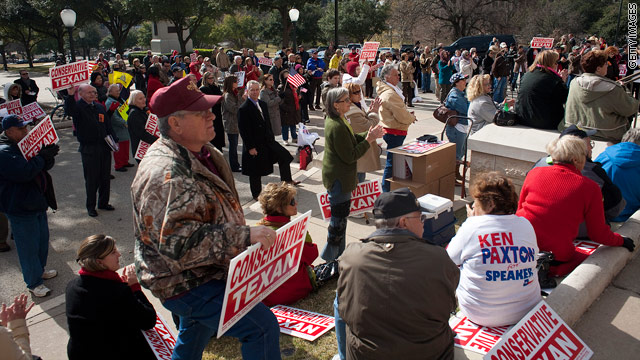 People belonging to the Tea Party movement convene at a rally at the Texas state capitol during the first day of the 82nd Legislative session on January 11, 2011 in Austin, Texas.
March 31st, 2011
10:19 AM ET

Washington (CNN) - No surprise here, but many in the Tea Party movement are furious with a possible budget deal between Democrat and Republican lawmakers in Congress.

And the anger is directed not just at congressional Democrats, but also at some Republican leaders in Congress.

Some of that anger will be visualized at a rally outside the U.S. Capitol scheduled for Thursday afternoon. The gathering is being organized by the Tea Party Patriots, one of the largest national Tea Party groups. That organization's leaders, along with many others in the movement, feel that the proposed budget cuts don't go far enough.

"Members of Congress have abandoned their service to the people by passing continuing resolutions instead of cutting the $100 billion they pledged," said Mark Meckler and Jenny Beth Martin, National Coordinators of the Tea Party Patriots. "Is it lack of leadership? Is it a lack of courage? A real budget will spark a national debate on the role of government, and that's what the American people want."

Conservative House Republicans are among those scheduled to speak at the rally, including Mike Pence of Indiana, Steve King of Iowa and Michele Bachmann of Minnesota, who may soon have a another job description: GOP presidential candidate.

Earlier Thursday the founder of the Tea Party Nation criticized House Speaker John Boehner, who is leading budget negotiations with congressional Democrats and the White House.

"Boehner must go. The Tea Party must unite and make sure Boehner is replaced in the next election. Boehner is living proof of something I have said for a long time. It is not enough that we vote out bad leaders, we must replace them with good leaders," Tea Party nation founder Judson Phillips wrote in an email to supporters. "Getting Nancy Pelosi out of the Speaker's seat was a good thing. Unfortunately, her replacement has not been very good. We need people in leadership who are committed to cutting spending and eliminating these programs."

Boehner responded to the Tea Party criticism and rally Thursday.

Funding for the federal government runs out next Friday. If there's no agreement on the budget by April 8, there could be a shutdown of some government services and offices.

A recent national poll indicated that most Tea Party activists are OK with such a shutdown. According to CNN/Opinion Research Corporation survey released earlier this month, 62 percent of self-described Tea Party supporters say a government shutdown for a few days would be good for the country. That's higher than the 53 percent of Republicans, 35 percent of independent voters and 21 percent of Democrats who said a short term shutdown would be beneficial to the nation.