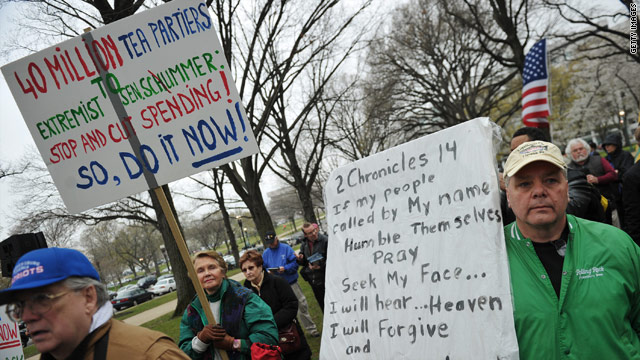 Washington (CNN) - As Tea Party activists rallied outside the Capitol to urge House Speaker John Boehner not to compromise on government spending cuts, Boehner insisted he's continuing to fight for the House-passed spending cut bill, but he also warned those conservatives that there's a limit to what the Republican-led House can do.

"All we can do is to fight for all the spending cuts that we can get an agreement to and the spending limitations as well," Boehner added.

Boehner is under pressure from conservative GOP colleagues after Vice President Biden announced Wednesday night that there was a tentative agreement to cut $73 billon from President Obama's proposed 2011 budget request, which was never enacted. That represents roughly $33 billion in cuts from current spending levels. Both parties often cite the higher number as evidence they are making deep cuts to government spending.

The speaker said Biden's announcement of an agreement was premature. "There is no agreement on numbers and nothing will be agreed to until everything is agreed to," Boehner said.

Congressional sources said aides from the House and Senate Appropriations committees were meeting Thursday to begin putting together a bill with the cuts.

Despite Boehner's assertion there was no agreement on an overall number, these aides said staffers were using the $73 billion figure as a framework but that number could shift. One Republican aide said the cuts were likely to come from all federal agencies.

A temporary government spending measure expires at the end of next week.