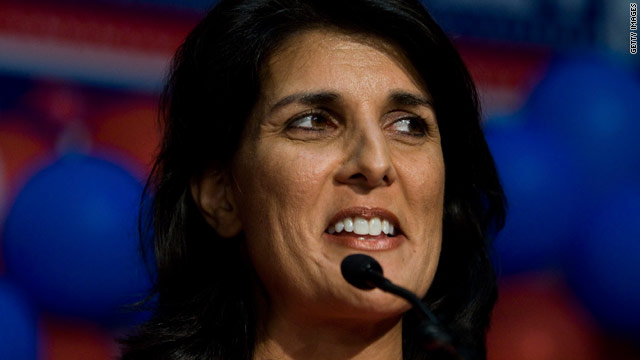 Washington (CNN) – Iowa and New Hampshire: get ready to share the stage.

April is shaping up as the unofficial launch of the South Carolina campaign, with several potential Republican presidential candidates readying appearances in the first-in-the-south primary state and a flurry of 2012 straw polls planned for local party events from the conservative upstate on down to the coast.

The month of stepped-up politicking will culminate on the first weekend in May with a Republican presidential debate in Greenville followed by two days of partisan cheerleading at the state GOP convention in Columbia.

This Saturday marks the beginning of the South Carolina's county convention season, when Republican activists gather in high school gyms and cafeterias to attend to local party business and tap delegates for the statewide convention.

But these grassroots gatherings, held over a three-week period in each of the South Carolina's 46 counties, also offer a precious chance for potential presidential candidates to introduce themselves to the state's most dedicated Republican voters.

And for political observers eager for insight on the state of the 2012 race, the parade of small-scale events offers a window into how hard-core Republican activists view the early field of presidential contenders.

Multiple candidates are now seizing the opportunity to make an impression.

Former Pennsylvania Sen. Rick Santorum - who has made a dozen trips to the state, far more than any other potential candidate - will be in Conway on Saturday to shake hands at the Horry County GOP convention.

That same morning in a different corner of the state, York County Republican Party officials will run a 2012 presidential straw poll at their own convention.

Santorum, Mississippi Gov. Haley Barbour and former House Speaker Newt Gingrich are all expected to attend the Greenville event on April 9, followed by the Spartanburg County convention occurring later that morning and just a few miles up I-85.

Another 2012 straw poll will be conducted on April 15 at the Charleston County convention, likely to be one of the largest Republican gatherings of the season.

And one more is planned for the next day in conservative Lexington County, a perennial GOP bellwether and the political home base of Gov. Nikki Haley.

Barbour is expected to return to the state that weekend to attend the Lexington convention.

Minnesota Rep. Michele Bachmann, another likely 2012 contender, will be in the Hilton Head area that weekend raising money and rallying Tea Party activists.

The fresh round of activity can't arrive soon enough for the small army of GOP activists and party professionals accustomed to having their rings kissed every four years or so by governors, senators and congressmen who pass through the state with dreams of 1600 Pennsylvania Avenue.

Ever since Lee Atwater arranged for the state to hold an early primary in 1980 to prop up conservative Ronald Reagan on his way to the Republican nomination, no GOP hopeful has earned his party's nod without first winning South Carolina.

"It's been very, very sleepy," said Republican strategist Warren Tompkins. "The notable frontrunners have basically stayed away. It's got to pick up because in order to win the primary, you have to go around the track a few times. It’s very much still a retail state, so the candidates are going to have come down here and use up some shoe leather.”

At this point in 2007, as in Iowa and New Hampshire, the presidential campaigns had already organized steering committees and placed key staffers in South Carolina. Not so this time.

Former Massachusetts Gov. Mitt Romney spent a small fortune in an effort to win the South Carolina primary in 2008 but finished in a disappointing fourth place.

Romney returned in 2010 to campaign for Haley during her successful gubernatorial bid and contributed tens of thousands of dollars to her campaign, but he has since been absent from the state and has no immediate plans to come back.

Former Minnesota Gov. Tim Pawlenty has hired staffers in Iowa and New Hampshire, but he has no one working for him on the ground in Columbia.

Pawlenty has quietly reached out to key players, though. Last month, during a day-long trip to the state, he met with Haley in her office at the state house. He also had a private breakfast with former Attorney General Henry McMaster in Columbia, and later dined with state Treasurer Curtis Loftis, who has boosted his profile in recent weeks by sparring with Haley over the state budget.

Huckabee has made repeated visits to the state to sign books, and he maintains a robust network of loyal grassroots supporters who could easily form the backbone of a campaign if he decides to run again. Hogan Gidley, the executive director of Huckabee's political action committee, is a former South Carolina Republican Party official and continues to make his home in the state.

Still, the Fox News talker has done next-to-nothing to mount a repeat bid in South Carolina, even though many local GOP insiders believe that he would be the immediate frontrunner in the state if he joined the fray.

No one has heard from Sarah Palin. The former Alaska governor appeared in the state for a few hours last December for a tightly-controlled book signing and promptly left.

Other potential candidates have been more aggressive.

Tompkins, who managed Romney's South Carolina effort during the 2008 race, told CNN he will work for Barbour, a longtime friend, during the 2012 cycle.

"If he runs, I told him I would do whatever he needs me to do," Tompkins said. "I am supporting him, yes."

Charleston-based strategist Jim Dyke is heading up Barbour’s national communications effort. And Greenville consultant Chip Felkel, who set up a series of meetings with state GOP bigwigs for Barbour in January, said he plans to support the Mississippi governor if he officially jumps into the race.

Richard Quinn, who managed John McCain's two primary campaigns in the state, has said he will back Jon Huntsman should the ambassador to China decide to join the field after he leaves his post in the Obama administration at the end of April.

Organizing political activity in the state for Bachmann is Sheri Few, a Lugoff-based activist who will likely play a role in the campaign if the Minnesota Tea Party favorite decides to enter the race.