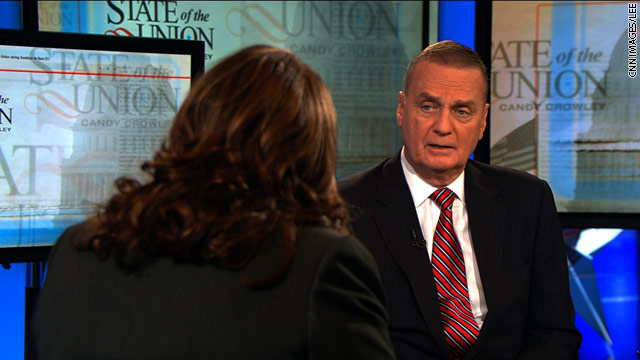 Jones said the problem now is how to transition from the humanitarian mission currently underway to preventing the African leader from staying in power.

Click to watch video
“The problem is that while everybody wants to see Gadhafi leave, either be removed or leave on his own, that end state is not yet clear,” Jones said Sunday on CNN’s “State of the Union.” “Unfortunately most people want perfect clarity in a situation where clarity doesn’t really exist yet.”

The retired general and former NATO supreme allied commander said the United States needs to better understand the opposition forces on the ground and “make sure” that the Arab League and African Union, who have more influence over Gadhafi, “play their role.”

The struggle continues in Libya between forces loyal to Gadhafi and opposition members seeking to end his nearly 42-year rule, while NATO leads an international military operation following a U.N. Security Council resolution authorizing force and the enforcement of a no-fly zone to protect civilians.

Jones warned of the impact the uprisings in the Middle East and Africa will have on Iran, saying the chaos is something the Iranian government is “reasonably happy with.”

“(Iran) is flying under the radar right now because, you know, you don’t hear too much about their nuclear program because everyone else is focused elsewhere,” Jones told CNN Chief Political Correspondent Candy Crowley. “But you can bet that Iran is affecting virtually everything and trying to play in every one of these countries where we’re having some difficulties … Iran is out there agitating things.”

Jones, who left the Obama administration in October, said the rebellion in Yemen is “very worrisome,” adding that the “trend lines aren’t terribly positive” for President Ali Abdullah Saleh to remain in power.

Saleh, who has ruled Yemen since 1978, is fighting to hold onto power amid opposition demands for constitutional reforms and parliamentary elections.

“The danger is that Yemen now will become a safe haven for terrorist organizations like Al Qaeda,” Jones said. “I think proactive engagement is much more economical than waiting until it, you know metastasizes, then you have another Afghanistan or something like that. The good news is I think we know a lot about where these organizations are going. The question is what do we do about it and when.”